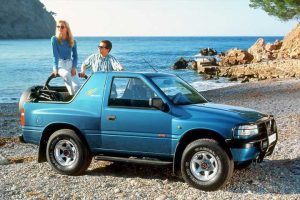 No question, the early nineties produced some timeless classics worth celebrating. Also, the Frontera

Old Vauxhalls tend to be very well received on PH, especially if they have a GTE, SRI, GSI or VXR badge on their bootlid. To be honest, it can seem like anything with a Griffin on it from the 20th century will get a sizeable audience. So now is definitely the time to put that affection to the test – the Vauxhall Frontera is 30 years old.

First shown to the world at the 1991 Geneva motor show, the Frontera – Spanish for 'border', don't you know – was built in Luton, with "dynamic looks, comfort and handling" outlined as key priorities. It's hard to imagine nowadays, with a new SUV derivative launched every second Tuesday, but conceptually speaking the Frontera was quite innovative back in the early 1990s. This was not long after the first Land Rover Discovery, don't forget.

As well as playing precursor to its modern lineup, its maker calls the Frontera a "trendsetter", which is stretching it a bit given the SUV segment's overwhelming triumph is to seem aspirational, a description that precious few Vauxhalls have ever really earned – least of all its paper mache off-roader. But there sure is a lot of active lifestyling going on in these press pics, from skiing to sailing, which is exactly the leisure dream sold by contemporary SUVs now. And if not a full cabrio in the Evoque or T-Roc sense, then the soft top Frontera previewed an appetite that was about to flourish.

Initially offered only with petrol engines – and becoming Europe's best selling off-roader by 1993 – the Frontera was facelifted in 1998 before going off sale in 2004. In the UK, that meant either a four-cylinder diesel or V6 petrol, and a less memorable look than the original. Perhaps it's just cabin fever talking, but is there something almost appealing about the Frontera's square-jawed ruggedness 30 years on? And wouldn't you know it, despite numbers plummeting in recent years due to its almost total lack of actual ruggedness, there's a Frontera for sale on PH – £4k buys this 2002 diesel with just 62,000 miles. It's utilitarian chic, right?