Home » News & Features » This 4WD, Diesel-Powered Mitsubishi Delica Van Has a Manual and Is Ready for Off-Road Exploration

This 4WD, Diesel-Powered Mitsubishi Delica Van Has a Manual and Is Ready for Off-Road Exploration Andy Lilienthal has a thing for Mitsubishi vehicles. He and his wife Mercedes own a 1991 Pajero XP, a 1992 Pajero, a 1994 Delica Space Gear, and a 2017 Mitsu Mirage that they nicknamed “The Rage.” They used to have a 1989 Delica Star Wagon, but it was slow, by their account, and wasn’t the Delica they really wanted to own. Then an opportunity came knocking.

Lilienthal posted a virtual for sale sign on the Delica Forum and Kellyn Carr, the site’s administrator, contacted him and mentioned a different Delica he was selling. This one, however, was a 1994 Space Gear—and a diesel, manual van to boot. The Lilianthals started thinking about buying the Space Gear, and when they inquired to find out where it was stabled, they gave each other a searching look. It was in Florida, a pretty big hike from their home in Portland.

Across the country. In the middle of a pandemic.

They needed a plan, and they came up with one borne of their experience as cross-country rally competitors. The couple agreed on a schedule and booked one-way tickets to Tampa, Florida, where they rented a car and drove it to Ft. Myers, a few hours away. They checked out the Delica, donned medical gloves, and signed for it, COVID-style. 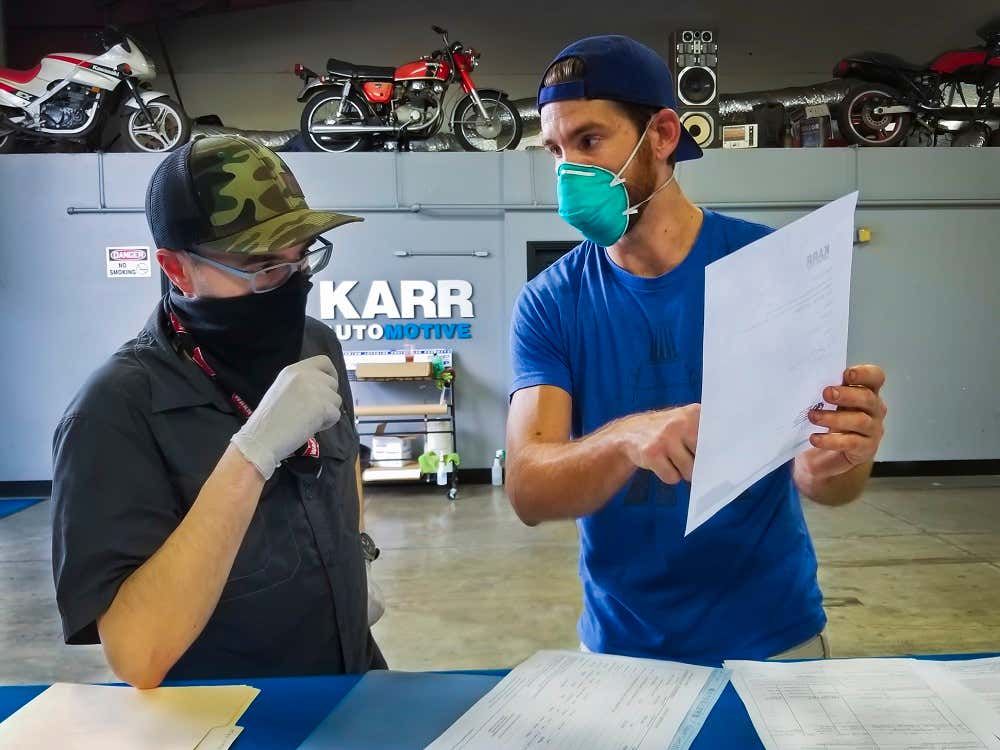 What is it about this particular Delica that called to them? As it turns out, the diesel-manual transmission combination is a rare one. The 1994 model was faster than the 1989 Star Wagon they had at home (“This one is like a Shetland pony and the old one more like a turtle,” Mercedes joked). It’s also what its new owners call the magic color: teal.

Mitsubishi’s Delica—pronounced de-lick’-uh or del’-i-ca but never de-leek’-uh, according to an extensive thread in the Delica Forum —only recently became legal in North America now that many of them are 25 years old or more. Launched in the late 1960s, the Delica was based on a cabover van and pickup truck of the same name. The brand launched the Delica Space Gear in 1989 and went by the abbreviated moniker Space Gear in Europe. JDM enthusiasts, van aficionados and adventurers love this thing because they’re weird, off-road capable, reliable, and often have lots of crazy accouterments.

The couple visited relatives who had moved from Germany to New Zealand in 2016 when they got to ride in a Delica for the first time.

“It’s such a weird and surreal vehicle; you’re sitting right on top of the engine,” Mercedes said. “We came home and decided we were going to look for one and find out if we were van people.” 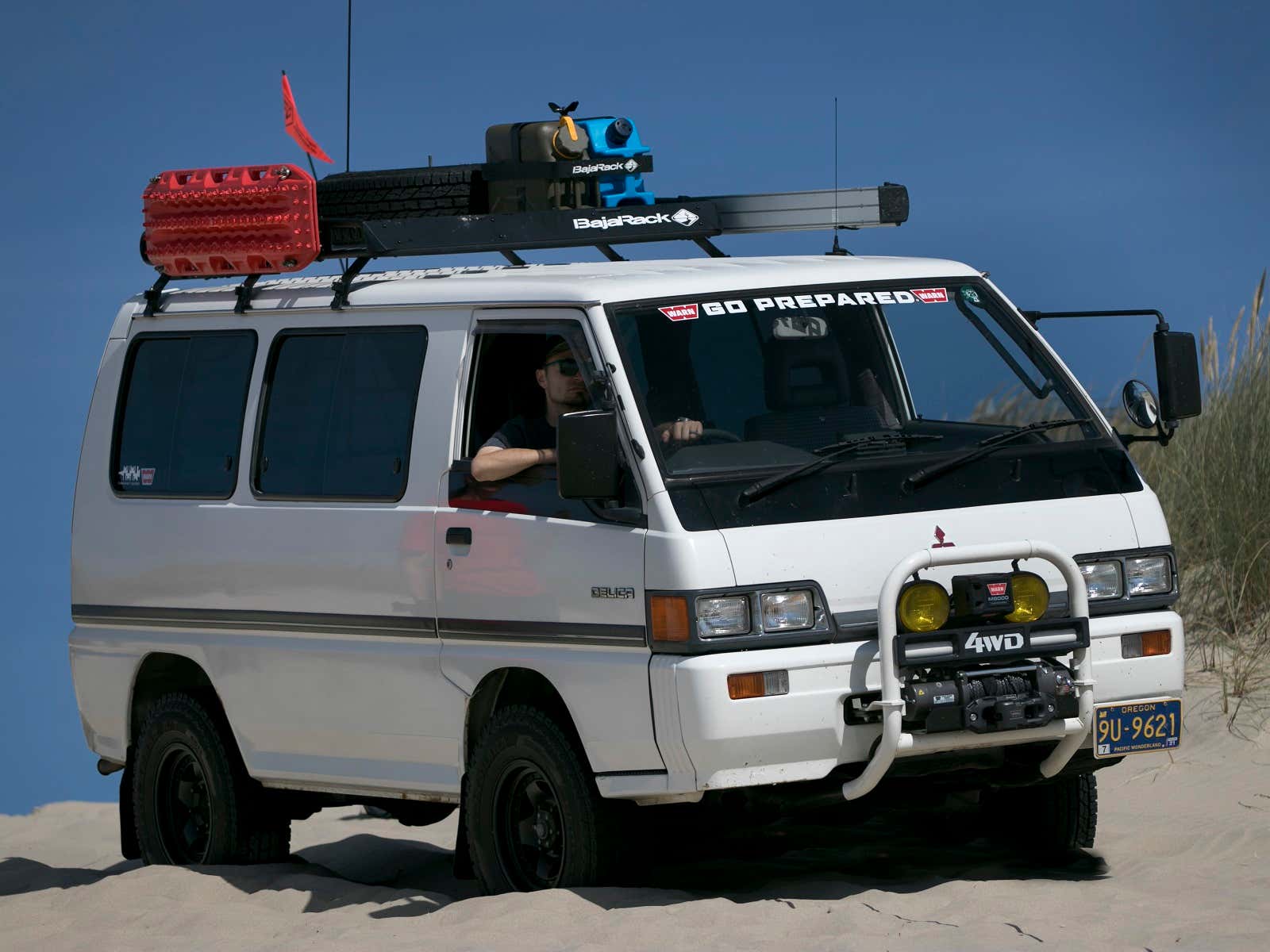 Months later, they discovered a white 1989 Delica for sale nearby at a local dealership. They checked the underbody for rust and then took it home.

“I was like a kid who had seen a Lamborghini for the first time,” Andy laughed. “Driving one was so different; it was the first forward-control vehicle I had ever driven. The L300 Star Wagon is like a VW Vanagon; you sit way at the front and it’s got this low-power diesel engine. It clacks along and makes turbo noises but it has this futuristic ’80s look like it’s from some cheesy ’80s sci-fi movie.”

Don’t you dare call this a minivan, though. Most popular in 4WD form, the Delica was available in an astounding number of trim levels and variants, with myriad engine choices, wheelbases, roof configurations, and special edition options. The Delica isn’t a rocket, and the Lilienthals say it reminds them of a 4×4 armadillo. The newer Space Gear, however, has quite a bit more power.

He reels off this information like a true fan, as if he’s reciting his own height and weight. 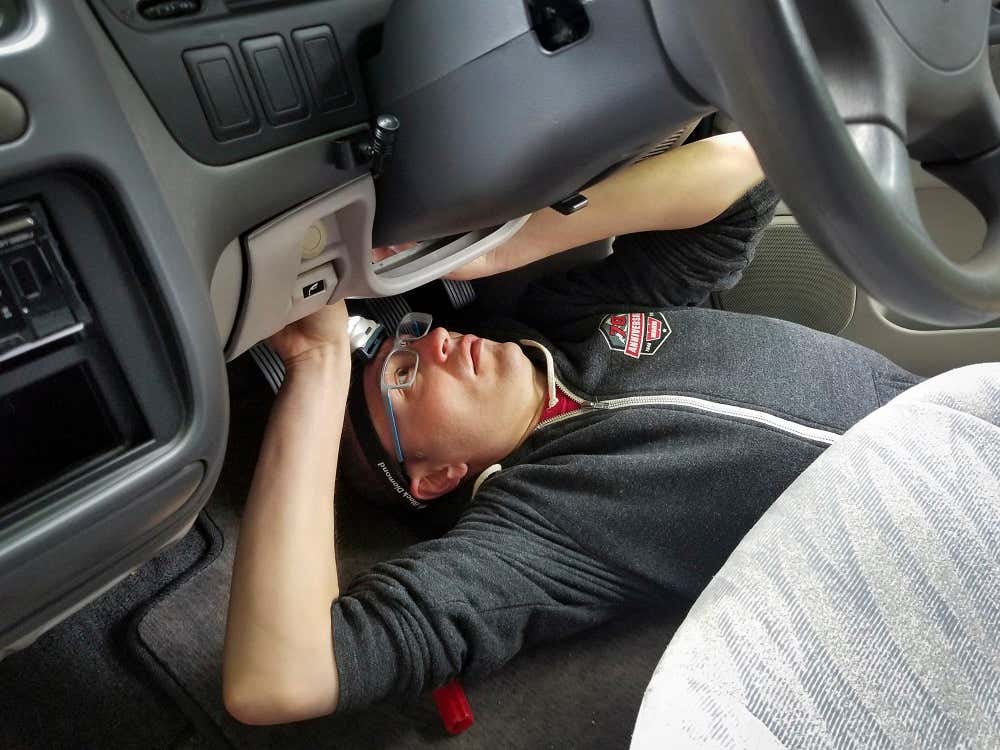 If you’re looking for parts for one of these vans, Andy says the key is to cross-reference the chassis code, because you won’t find it by the VIN number. The Delica shares many components with the Mitsubishi Montero, Mitsubishi Mighty Max, and Mitsubishi Van, which were imported to the U.S. Delica USA has a parts store, and the community in the Delica Forum is willing to help. Driving a Delica is alien to anyone not acquainted with a forward-control vehicle, or if your parents never had a giant Chevrolet van when you were a kid. Climbing in might feel a little awkward since you’re sitting over the wheels, but the visibility is excellent. In the Delica, you have to let the glow plugs heat up the inside of the cylinders, then crank the engine and its turbo-diesel mill will fire up.

What’s interesting about the L300 is that it has a mid-engine configuration, meaning that if you want to access the engine in this case, you lift both of the front seats. While you’re driving or riding shotgun, you’re sitting right on top of the powertrain. That’s not where the fun stops, however. This funky fresh van could have included the Cool Box, which was a 12-volt refrigerator/freezer that was nestled between the two front seats. Or you could have had a Delica with a karaoke machine. Because of course. 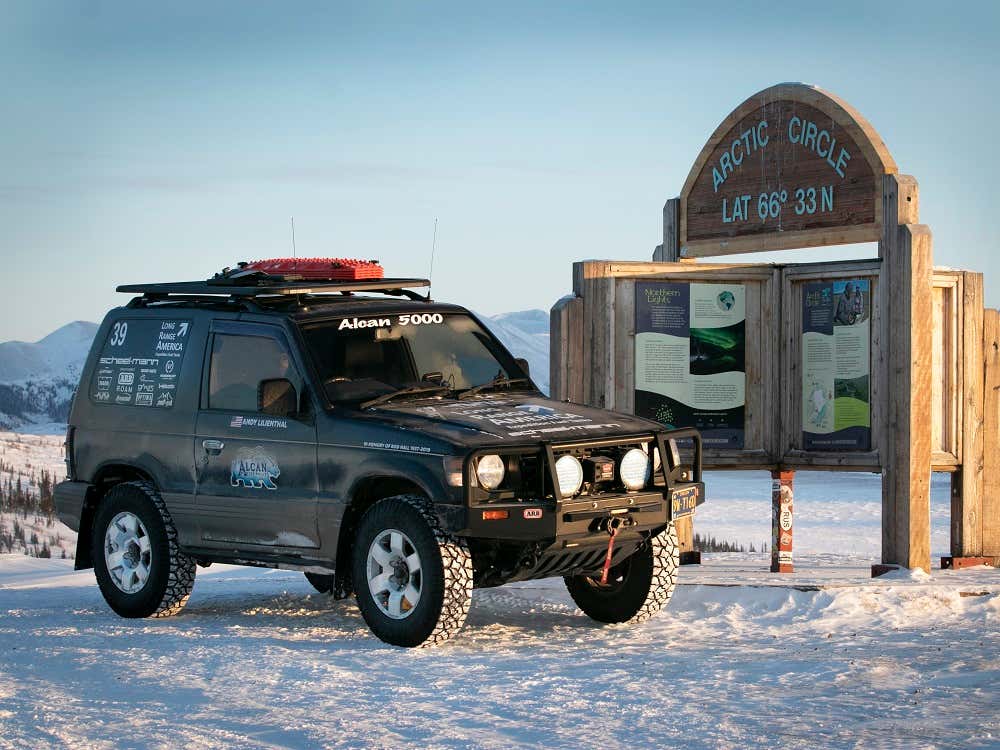 Active competitors in the off-road genre, the Lilianthals’ most recent rally was the Alcan 5000, which is a 5,000+ mile adventure in frigid temperatures down to -40 degrees Fahrenheit. They ran their 1991 Mitsubishi Pajero in the Historic Class, earning the Finisher, Arctic, Go Farther, and Second in Class awards. Both are competent wrenchers, which is required when you own a vintage vehicle, especially if you’re competing in places like the Arctic Circle.

“If you’re going to get a van like a Delica, you have to know how to turn a wrench,” Andy Lilienthal told me. “You’ll have to learn how to replace things and do little things. This is not a 2012 Toyota Sienna; it’s a 30-year-old Japanese van never sold here.” 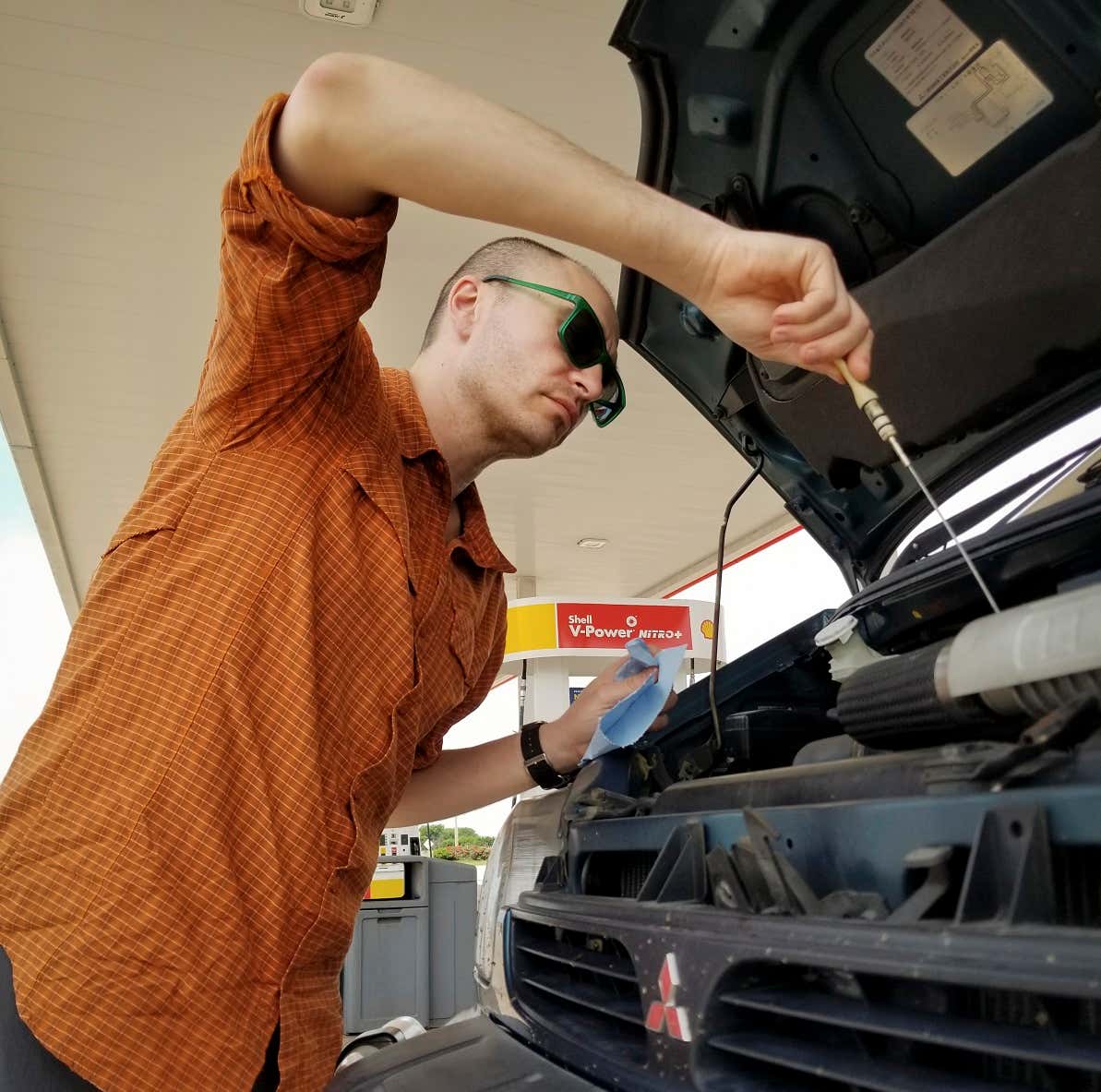 They’ll be ready for their next off-road adventure with the Mitsubishi Delica, which they have modified since July with new BF Goodrich KO2 all-terrain tires; a front winch bumper, skid plate, rear bumper, and swing-away tire/ jerry can carrier from Coastal Offroad; new bumpers, lights, winch, and replacement diesel tank from Wanderlust Overland; a Long-Range Automotive Australian tank; aftermarket auxiliary and fog lights from Lightforce USA, and a Warn Zeon 8-S winch with Epic fairlead and winch hook.

In the meantime, every outing brings a new set of fans to the Teal Terror, as the 1994 Delica has been dubbed. 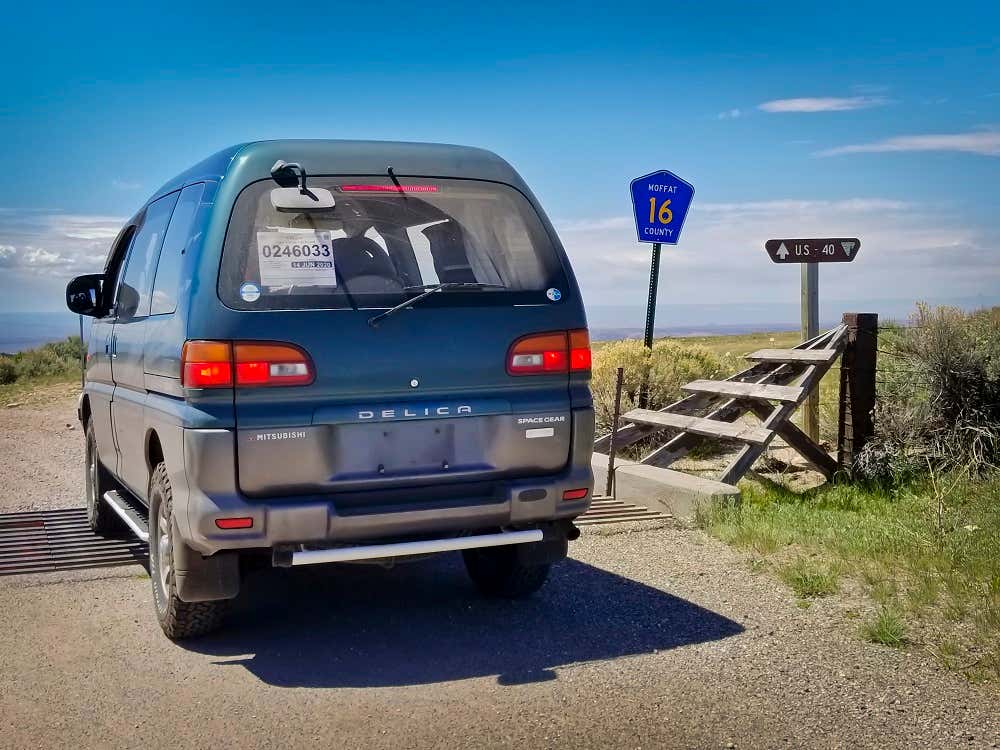 “Last week, we had to run a few errands. In each parking lot, people came out of the stores to see it,” Andy told me. “They wanted to know what it was and could they look inside.”

Mercedes chimed in: “I always tell people if you’re going to get a Delica, be prepared to talk about it nonstop. We stopped at an auto parts store and the guy checking me out said, ‘Is that yours? What is it?’ and he proceeded to take 10 photos of it.”

The Space Gear is tall, it’s top-heavy, and you have to get used to driving on the right-hand side. But it definitely has personality. So if you’re an introvert and don’t like to talk to people, a Delica may not be for you. In a future time post-coronavirus, though, you might welcome an opportunity to chat with a stranger in a parking lot.