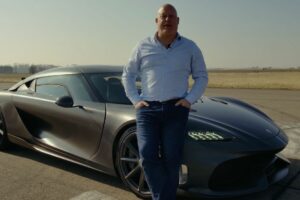 Koenigsegg has teased the Koenigsegg Gemera in a short video showing the test vehicle alongside prototypes of the Jesko and Regera, and we finally get to hear the small but mighty engine of the ‘mega-GT’ spring to life and drive off. Koenigsegg has been drip-feeding updates of the Gemera’s development for a while now, and now founder Christian von Koenigsegg has given the public a brief look at the car in action.

What makes the Gemera so interesting is that it’s powered not by a monstrous V8 engine from the Koenigseggs of old, but instead a 2.0-litre twin-turbocharged three-cylinder engine. As a result, the car doesn’t sound exactly like you might expect, and as it’s still in the development stage it has a raw and raspy edge. This prototype model is also currently limited to around 4,500rpm, so it’s yet to be heard at its full, wild potential.

We’ve seen what a potent three-cylinder engine can be capable of in a modified Toyota GR Yaris, and although getting an exotic exhaust note from a three-pot can be a challenge, it proves that a fine-tuned exhaust can result in a pretty cool soundtrack.

Nicknamed the ‘Tiny Friendly Giant’ (TFG), the Gemera’s three-cylinder is quite a feat of engineering. The twin-turbocharged 2.0-litre combustion engine alone produces a whopping 600bhp, 443 lb ft of torque, and it’s part of a hybrid drivetrain that’s supplemented by three electric motors. Two electric motors power each rear wheel, producing 500bhp and 737 lb ft of torque, while a 400bhp electric motor can also supply 369 lb ft of torque to the crankshaft. Koenigsegg claims this hybrid combination is capable of 1700bhp.

As if things couldn’t get more quirky, the Gemera is also capable of seating four adults and some luggage, and is described as a ‘mega GT’ car. This ethos is represented in the Gemera’s name, which Koenigsegg says is a combination of the Swedish words ‘ge’ (give) and ‘mera’ (more), highlighting the no-compromise approach they’ve taken with this car. Christian von Koenigsegg says this has really helped save time working on the prototype, as three developers and a driver are able to sit in the car fine tuning it at once.

The Gemera really is a hybrid in more ways than just its powertrain. Who’d have thought a two-door, three-cylinder, four-seater hybrid could be capable of 1700bhp and come with dihedral synchro-helix doors and supercar looks?

This is where the Gemera really does impress – its sleek, low profile and menacing looks make it quite clear it’s something very special, and its long silhouette and doors designed to accommodate four passengers are simply awesome. It looks like nothing else on the road and we can’t wait to hear that exhaust note once Koenigsegg’s done with it.