Home » News & Features » This Normal-Looking, Three-Ton 1990s Carrera Is the Only Bulletproof 911 Porsche Ever Made 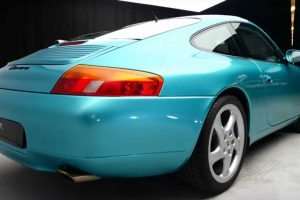 This early 996-generation Porsche 911 Carrera concept looks just about like any other 911 Carrera from the outside. It’s owned by the Porsche Museum, which keeps it in pristine condition. It wears a period-correct metallic teal paint job, which is spectacular. However, it’s also considerably heavier than other 996s, as this is Porsche’s lone bulletproof 911 concept car.

On the other side of Stuttgart, Mercedes made a lot of bulletproof cars in the late nineties, according to That Nine Eleven Guy. The celebrity, diplomat and despot market was big business—so much so that a customer inquired if Porsche made an armored car. So, Porsche tested the waters with a concept build, and the end result was this beautiful one-of-one bulletproof 911 Carrera. Porsche won’t name the customer who asked about a bulletproofed 911 for obvious reasons, but the company did an incredible job of making this concept look as normal as possible on the outside. It has the same fried-egg headlamps that 911 purists continue to hate on to this very day. It wears a stunning coat of Dragonfly Turquoise Metallic paint. The body itself was taken off of the regular 996 production line in early 1997.

You can tell there’s something off about it when you open the door, though. Every window in the car is made of 20-millimeter-thick double-glazed Sekurit glass that’s designed to stop any bullets from making it through to the passenger compartment. The two-inch black border on every window might tip off someone who knows 911s well as to the fact that this car is unusual, but that’s really it. Porsche even included the defroster wires on the rear window.

To try and keep the car’s weight down as much as possible, Porsche skipped the heavy steel plating found on many armored cars. Instead, they used an energy-absorbing composite fiber material called Dyneema to bulletproof the car. The material weighs the same as steel, but is 15 times stronger, according to That Nine Eleven Guy.

All of that extra armor has consequences for the car’s drivability, though, as the bulletproof 911 Carrera weighed three tons. It didn’t get any extra power to compensate for that weight, as it still had the stock M96 flat-six engine that produced 316 horsepower when new. It also came with a manual transmission.

As That Nine Eleven Guy explains, Porsche did test out the concept’s high-tech armoring and found that the body and windows could withstand .44 Magnum and 9mm shots in most places. Ultimately, however, this bulletproof 911 Carrera was expensive to build and there simply wasn’t enough demand to justify adding bulletproofing to Porsche’s extensive list of factory options. The car never left Porsche’s own collection.

To this date, it remains the only driveable armored Porsche 911. I guess the paranoid despot market really can’t be wooed away from Mercs after all.