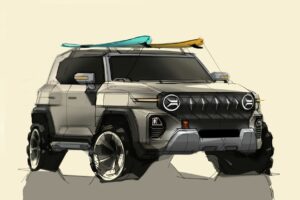 South Korean automaker SsangYong is not exactly a household name in the U.S., but the company has produced a sketch of something that will be fairly recognizable here in the states. That something is a preview of the X200, slated to be its next SUV model, and along with a sketch shared of the sport utility SsangYong revealed an American-sounding name for the design direction.

“The design of the new X200 is based on SsangYong’s new design philosophy ‘Powered by Toughness,’ and follows on from our recently announced J100 mid-sized electric car,” a spokesperson for the automaker said. “With this new design, the company is showcasing its new product identity to communicate a powerful and modern SUV while drawing on the inherited values its authentic heritage.”

The admittedly sharp-looking design aside, we’re more surprised that no U.S. ad agency has successfully pitched the tagline “Powered by Toughness” to a stateside automaker, because it sounds exactly like something you might hear in a TV spot for a pickup truck here in the states.

Clearly, there are some Jeep styling cues here, including the blacked-out front fascia tapering toward the bottom in a V-shaped pattern, but rather than seven vertical slats there are five diamonds between the round headlights. Rhombus-shaped inlets below the headlights are popular among a number of automakers at the moment, including Mitsubishi, while the angular wing above the front and rear wheelarches are another modern theme, one that works particularly well in this sketch

How large is the concept?

The scale of the X200’s doors in this sketch suggest something sized just below the four-door Wrangler, without much of a transition between the rear passenger doors and the D-pillar and very short overhangs. So we’re likely looking at something Renegade-sized. 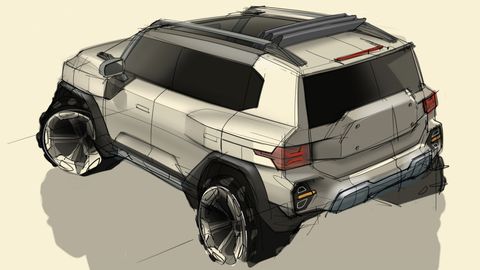 While the sketch of the X200 will remind most of the Wrangler, we see some elements of another SsangYong model here, namely the second-generation Korando of the 1990s, popular in southern Europe at the time. Specifically, the wings over the wheelarches were a prominent Korando feature of the 1990s, as was a V-shaped grille with two round headlights.

But SsangYong itself is not without Jeep history, as versions of the CJ-5 were produced in South Korea starting in the 1960s by Ha Dong-hwan Motor Company, and sold under the Asia Motors brand for a time. The automaker was eventually absorbed into SsangYong in the mid-1980s, along with a Jeep-style model named the Korando, receiving the name in 1983. The later 1990s version of the Korando put a little distance between itself and the Wrangler, offering a more “urban” look.

“We have re-interpreted our future design vision and product philosophy by drawing heavily on our unique heritage,” Lee Kang, head of the SsangYong Design Center. “With the forthcoming J100 and X200 models, we have drawn a line in the sand in terms of design, and everything from this point forward will follow this new brand design direction. It is a very exciting time for SsangYong and will build on the history and heritage of its unique and distinctively authentic SUV designs to impress its customers of the future.”

Should SsangYong offer this model stateside if it could launch a dealer network? Let us know in the comments below.