This Surprisingly Well Made, Boxster-Based McLaren F1 Replica Even Has A Central Driving Position 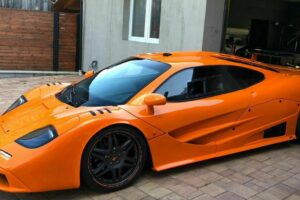 Bad supercar replicas are pitiful and funny in equal measure – they’re always a bit (or a lot) out of proportion, on tiny wheels and they still tend to have the entire dashboard from a Toyota MR2, albeit with one Ferrari sticker on the steering wheel. Most are hideous and very poorly executed, like if a surgeon reattached your arm the wrong way around. From a distance it might look like you, but up close it’s clear something’s not right.

Wait, you might be saying. Is this McLaren F1 LM I see before me not a McLaren product? Occasional CT contributor and perennial eBay sleuther Lewis Kingston came across this F1 replica for sale in the Czech Republic, and we were kind of shocked at the quality of the presentation. Underneath the orange paintwork it’s a Porsche Boxster, and you’d be hard-pressed to tell that it isn’t the real thing. A huge amount of work has clearly gone into it. It even has a central driving position!

There are just a few details that you’d notice if this was parked side-by-side with the real thing. It has a pair of universal LED running lights where the indicators are on the real one, and it’s unlikely that the rear side skirt panels would be riveted on in the McLaren factory. The real car features a splitter, too.

On even closer inspection we wouldn’t expect to see the exhausts poking out next to the tail-lights, nor those tail-lights for that matter. But we played spot the difference with this replica and a real one, and if you don’t have a spare F1 LM to compare it with then it looks like the real deal.

And unlike most replicas, this one has at least some performance to match its looks. All the driving bits have been left alone, so it still sports full Boxster underpinnings. That’s presumably why the Porsche dials are still in place. It won’t be limited-edition ‘90s hypercar rapid, then, but still quick enough to give the impression that this might be something special.

We’re told that the car is fully drivable, and that it has a hydraulic nose-lift function to get it over speed bumps.

The seller has set the auction start price at £51,000 (although at the time of writing no bids have been made and the reserve hasn’t been met). Probably because it’s a lot of money for an old Boxster, even one that does look like supercar royalty. There’s just one thing to note for a potential owner – the conversion isn’t registered, so that’ll need to be done otherwise a police officer might stop you because your McLaren’s plates should be on a Porsche.

What do you think of this McLaren F1 replica? Pole position or back of the grid?