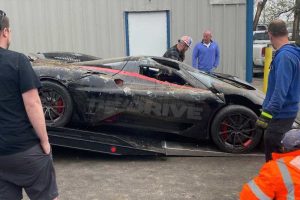 The SSC Tuatara is the fastest production car in the world, but it’s not without its share of controversy. You probably remember the chaos surrounding the SSC Tuatara’s first speed-record attempt in 2020 when the official video showing its alleged 331-mph top speed run was debunked by a consortium of skeptics on social media. SSC eventually admitted the video was “incorrect” and vowed a re-do in January, where the same 1,750-horsepower hypercar set a confirmed 282.9 mph top speed record. Of course, that’s still under the magic number of 300 mph, a mark the company vowed to smash with yet another attempt. But now, it looks like some repairs may be in order first.

The Drive can report that the SSC Tuatara world record car was heavily damaged in a car carrier crash in Utah in April as it was on its way to Florida to prepare for that next 300-mph run. According to a source who provided these pictures—which were taken in a tow yard in northern Utah as the car was extracted from its destroyed trailer—the Tuatara was in transit on Interstate 15 just north of Salt Lake City when high winds caused the enclosed carrier to flip over. Just from the photos, you can see the $1.9 million car was left in very rough shape. 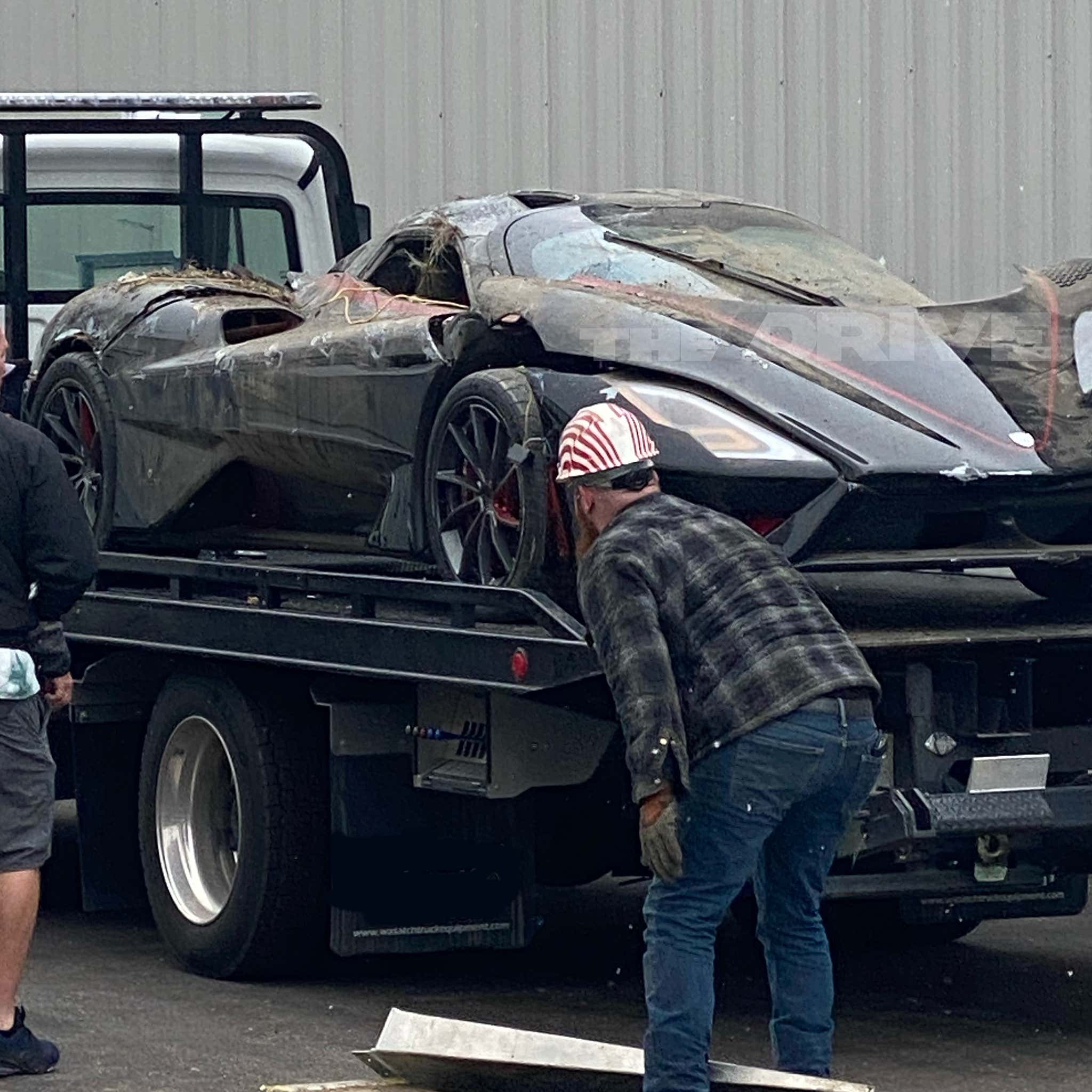 We spoke to SSC North America’s owner and operator Jerod Shelby, who told us that this particular Tuatara, car no. 001 owned by Larry Caplin, can be repaired. He also insisted the damage to the vehicle was mostly cosmetic, and that they are already well into the process of fixing it. Even if that’s the case, though, there is not another car ready to beat the record in its place, he told us. #001 will have to be repaired before another run is attempted.

As previously mentioned, this accident comes after the hypercar, powered by a monster 1,750 horsepower twin-turbocharged V8 built by Nelson Racing Engines was claimed to have gone 331 mph last year in October—316 over an average of two passes on Nevada’s Highway 160. That was before internet sleuths debunked the claim. Shelby filmed a video, posted below, saying he was going to make it right, and re-run the car.

In the short clip, Shelby says that “The more we looked and the more we tried to analyze, the more we were concerned there were doubts in the relationship between the video and the GPS.”

To his credit, a second run at the Kennedy Space Center’s 2.3-mile Shuttle Runway did happen. A world record was broken, but it wasn’t without issues. The car, driven by owner Caplin, had mechanical trouble that prevented it from breaching the 300 mph mark. Since then, the company has been hell-bent on finally getting a clean pass to prove what the Tuatara is truly capable of. That was supposed to happen back on April 17, but needless to say, the car never made it.

According to the source who provided the images and Shelby himself, the car carrier was traveling along the Interstate late at night on April 13 when strong winds blew it over on its side. That same evening, our source tells us that “high profile vehicles were advised not to travel on I-15 from Ogden to Salt Lake.” Ogden is around 23 miles south of where the truck was blown over near Brigham City, but the high winds must’ve extended further north than anticipated. 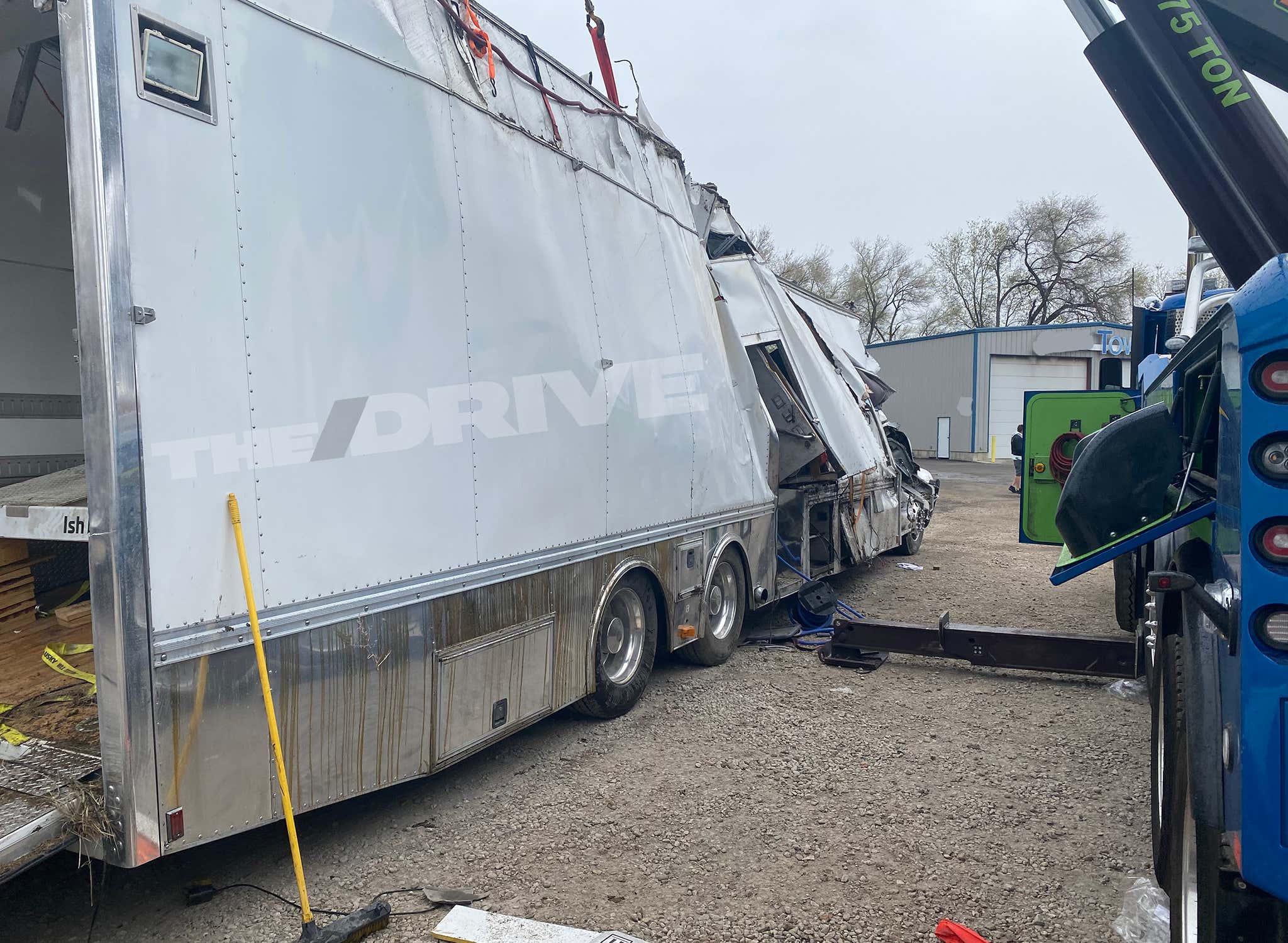 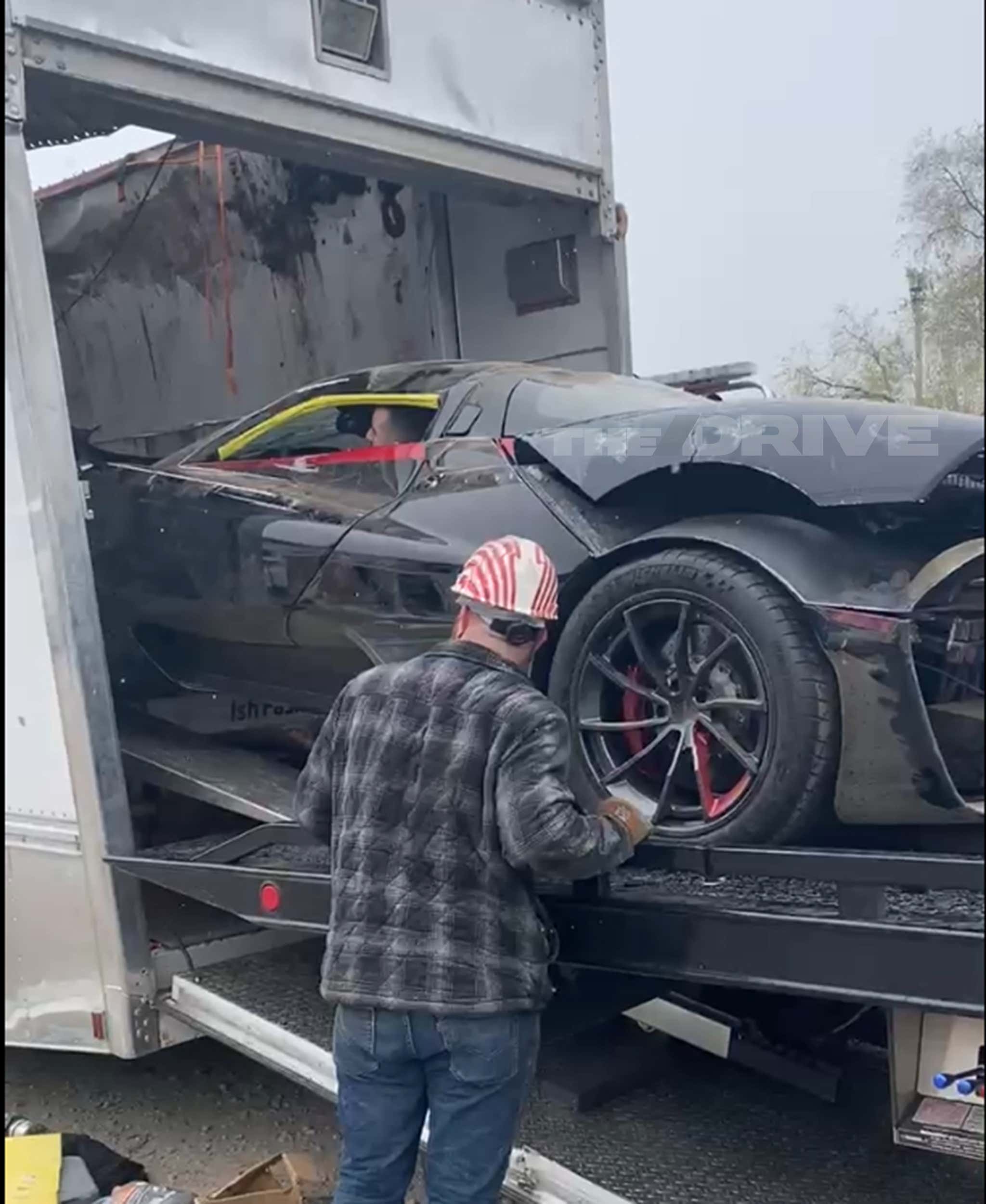 Our source claims that the only other vehicle onboard the truck at the time of the accident was a motorcycle, parked on the lower deck of the transporter—the Tuatara was strapped in on the top deck. The driver and passenger who were on board at the time both walked away from the accident, although one was later hospitalized, Shelby said.

The truck reportedly ended up at an impound/tow yard after being hauled from the scene of the accident, and our source indicates that the car carrier was so badly damaged—Shelby said it was “destroyed”—that its own internal lift was not functional when it came time to remove the stricken hypercar from the top deck. The cables supporting the vehicle had to be cut and the car lowered carefully with help from a tow truck.

Shelby—you can see him clearly in the lead image of this story—was on the scene for the duration of the Tuatara’s removal from the carrier. The entire ordeal was filmed with help from a documentary crew who has been recording the company’s journey to break the 300mph barrier for the past three years. The Drive also received a video of the extraction from our source, which is embedded below.

No other completed Tuataras exist right now, so you might say this accident is a pretty big hindrance to SSC’s future record plans. Shelby insists that’s not the case, though. “At first glance, we thought it was going to be pretty severe, but it ended up not too bad at all,” he told us. “We’re well into the repairs, and fortunately, it didn’t touch chassis, drivetrain, suspension, any of that.”

He went on to say that the company has all of the parts necessary and all of the expertise to fix the car. When asked about a possible timeline for the next test, he said SSC is still working on the scheduling but another run can be expected in “weeks not months.”

“This doesn’t change our goals, it just changes our timing,” Shelby said.

Got a tip or question about the SSC Tuatara for the author? You can reach them here: [email protected]