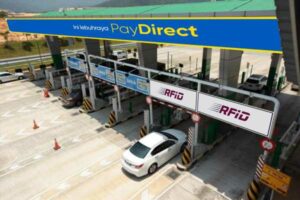 Touch ‘n Go (TnG) says the rollout of its RFID (radio-frequency identification) tag system at major expressways across the country has been delayed due to the Covid-19 pandemic. However, the company is continuing to work closely with concessionaire partners to ensure that the system’s incorporation across several major expressways continues and will be accomplished smoothly, The Malaysian Reserve reports.

According to TnG group CEO Effendy Shahul Hamid, a total of 273 lanes on expressways had undergone RFID testing, and both the company and its concessionaire partners will work towards ensuring optimal performance of each RFID lane before the official nationwide launch.

Currently, the RFID system is in operation on all highways except for certain stretches, which are the North-South Expressway Project in Juru, Penang, to Skudai, Johor; the East Coast Highway in Karak, Pahang, to Terengganu; and the West Coast Expressway in Kampung Lekir to Beruas in Perak.

Effendy attributed movement restrictions brought about by the various movement control orders as one of the main contributing factors of the delay in rolling out the system. “While the pandemic has caused some delays in the RFID enablement at major expressways, we are also mindful of prioritising the health and safety of all relevant personnel involved,” he told the publication.

Despite the lag, more users are making the switch to fully contactless payment, with Effendy saying that Tng RFID tag sales had increased. “Contactless convenience is a new consumer behaviour and trend we have observed. Going cashless has become the preferred choice for most toll users. As a result, RFID sales have been steadily rising, especially with the introduction of the self-service kit in May 2020,” he said.

The company said that more than 500,000 tags had been sold since the the system was commercialised following its pilot programme, which began on September 2018. Presently, the self-service kit can be purchased via TnG eWallet and the company’s official stores on e-commerce platforms such as Lazada and Shopee.

As for numbers, the company said that the TnG ecosystem currently has 25 million active TnG cards, over 16 million e-wallet users and 1.5 million users running on RFID tags.

Beyond electronic toll collection payment, the system is set to be utilised for fully cashless fuel payment. The company and Shell Malaysia is currently running a TnG RFID Fuelling pilot programme at five selected Shell stations in the Klang Valley until August 12. The cardless and contactless fuel payment system enables users to buy petrol via the TnG RFID tax affixed on their vehicles, with payment made via the TnG eWallet linked to RFID.

This is part of the plan to expand the usage of TnG RFID beyond toll payment. In February last year, the company had outlined the implementation of parking payment and drive-thru retail payment as other expansion channels for the system in the future.