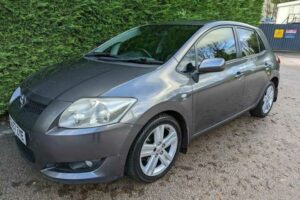 Remember when a 2.2-litre oil burner was cool? Us neither

We all know that there’s an element of risk in any used car purchase. Shed knows this better than most, having been on both the giving and receiving end of motorised riskbuckets for more years than he cares (or is able) to remember. Today’s shed is an interesting example of this phenomenon as it manages to blend the almost entirely risk-free image of Toyota with a level of brow-knitting uncertainty that would give even Evel Knievel pause for thought.

You’re probably wondering what an Auris is doing here at all. It’s a fair question because the hatchback is a strong contender for the title of world’s most boring car. It was saddled with a sales proposition, a look and a name that were all carefully designed not to heat the blood by a millionth of a degree or raise the heartbeat by one extra beat per century.

The proposition bit was simple: reliable transportation. The look, also used in the K12 Micra and the Leaf, was based on a lemur being gently strangled. The first part of the name, ‘Auris’, was a masterpiece of anonymity, one of those made-up handles that steampunk-steeped specialists are paid fortunes to come up with. If you asked Toyota about it they would say it was inspired by the Latin word for gold, ie aurum, and, er, well Auris sounds a bit like aura doesn’t it so, er, golden aura! Yes! Everyone off to the cocktail bar, mine’s a large one etc.

However, it’s the second part of this particular car’s name – T180 – that threatens to ramps up the adrenalin level to something approaching a state of wakefulness. It’s telling us that this car has what contemporary test reports reckoned was the best thing about it, namely Toyota’s all-aluminium AD four-cylinder D-4D direct-injection diesel engine.

Of the two sizes and three powers available, the Auris T180 had the biggest (2.2 litres) and the poweriest at 177hp and 295lb ft, which made it good for a 0-60 time in the high sevens, a top whack of 131mph and a combined fuel consumption of 45mpg. The internal designation for it was 2AD-FHV, but the last owner of this particular example may well have thought they had bought the unofficial FML version as it is now being described by the dealer as ‘a bit smokey (but) drives fine, hence price’. We’ll get back to that in a minute.

Road tests at the time of the T180’s release in 2007 (the same year as our shed) had it down as a strong, economical and refined performer let down by less than stellar handling courtesy of over-assisted feedback-free steering and too much body roll. We’re not given any interior pics with the ad but Shed can tell you that the cabin’s shiny plastics did not inspire. Still, the spec was decent with cruise, climate, and an electric sunroof.

The depressingly inky MOT history of this car tells us that successive owners have made the common mistake of thinking that because it was a Toyota, it required literally no maintenance. The result is a sad tale of tyres worn down to the cords, knackered brakes and suspension and, as a kind of grisly garnish, occasional attacks of subframe, ARB and spring corrosion. Money has (probably grudgingly) been spent on reining in the annual list of advisories to something shorter and less frightening, and the current MOT is actually clean apart from needing two new tyres on the back. The ticket runs to next January so you’ll have a few months to work out exactly what is causing the ‘bit smokey’ thing.

What could it be? Well, these direct-injection AD engines are known to suffer from minor ailments such as carbon buildup, heavy oil consumption, blocked EGRs and head gasket failure. But before you all run off complaining about your time being wasted there’s some possibly better news which is that it could just be a DPF regen issue. The ad doesn’t mention coolant loss, a normal by-product of HGF, and neither does the MOT, so you might well be lucky and land yourself an oddly-named but speedy and cheap-to-run hatchback that won’t melt its top end or your wallet.

The question, as ever, is are you feeling lucky? Shed hasn’t since the day he mistakenly thought Mrs Shed had run away with the bin man, but don’t let his life experiences put you off.