Toyota cars to get more expensive from October 1 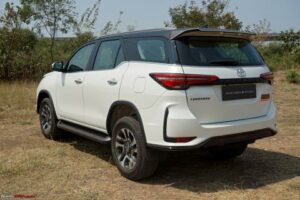 Toyota is likely to introduce the Fortuner Legender 4×4 and Belta sedan in the coming weeks.

Toyota has announced a price hike across all its models from October 1, 2021. Prices are being raised to offset the increase in input costs.

Meanwhile, Toyota is gearing up to replace the Yaris with a rebadged Maruti Suzuki Ciaz, called the Belta. The former was officially discontinued earlier this month.

The Belta will use the same 1.5-litre, 4-cylinder mild-hybrid petrol engine as the Ciaz. This engine produces 103 BHP and 138 Nm and comes paired with a 5-speed manual or 4-speed automatic transmission.

Reports also suggest Toyota is likely to introduce the Fortuner Legender 4×4 in the first week of October. The carmaker could replace the spare alloy wheel with a steel rim to reduce costs, while 2-zone automatic climate control could be made standard across the range.