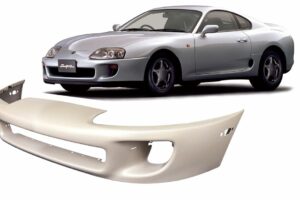 Keeping an ageing car going is easier said than done. Stuff wears out as your vehicle ages, and for a lot of components, your only hope of locating replacements involves the faff of scouring eBay, enthusiasts groups and scrap yards. Happily, manufacturers are stepping up and offering a more convenient solution – putting those hard-to-find bits back into production.

One such company is Toyota. It launched the ‘GR Heritage Parts’ programme last year with a selection of A70 and A80 Supra parts, later expanding to offer 2000GT components. Now, the company has revealed a bunch more A70/A80 parts it’s adding to the roster.

For the A70 from July, you’ll be able to order the clutch master cylinder, clutch release cylinder, brake hoses, heater hoses and an air conditioning control knob. Starting in August Toyota will be flogging the car’s front badge, and the same month (but potentially later) side protection trim, the rear badge, front door trim and lower suspension arm bushings.

The new A80 offerings are a little more limited. From July you’ll be able to get hold of an oxygen sensor, with the front bumper added from August “or later”. All of these are available around the world via Toyota dealers for as-yet-undisclosed prices.

Due to the nature of the deal Toyota has struck with its suppliers, the new bits will only be in production for a short period. So if there’s anything you need, don’t hang about – once that stock is gone, you’re back to trawling the Internet.