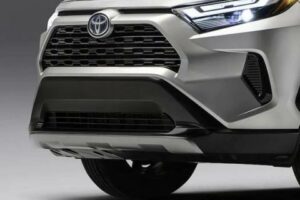 The Toyota Hyryder will take on the Hyundai Creta, Kia Seltos, MG Astor, Skoda Kushaq and others.

Toyota has confirmed the date for the unveiling of its all-new mid-size SUV for the Indian market. The SUV, which is expected to be called Hyryder, will be revealed on July 1, 2022.

The Toyota Hyryder will be based on a localised version of the TNGA-B platform and manufactured at the company’s plant in Bidadi, Karnataka.

The car will come equipped with plenty of features including LED headlamps, an electric sunroof, floating touchscreen infotainment head-unit with connected technology, ventilated seats, 360-degree camera and a lot more. The SUV is said to be powered by a 1.5-litre strong self-charging hybrid powertrain with different drive modes.

The Toyota Hyryder will take on the Hyundai Creta, Kia Seltos, MG Astor, Skoda Kushaq and others. The Hyryder SUV will share its underpinnings with Maruti’s upcoming mid-size SUV, codenamed YFG. The Maruti SUV, though, is expected to arrive at a slightly later stage and have a different identity of its own.