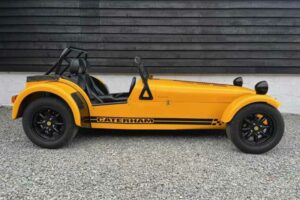 If track days are about lightweight (they are), then besides two-wheeled options they don’t come much lighter than a Caterham 7. So, as you’d probably guessed, we’ve got one in early doors. There isn’t a vast array out there within our £20k budget, but of the ones there are, this stood out. Partly, it’s the colour, which I know isn’t of primary concern, but come on: in yellow with Superlight decals it looks absolutely magnificent. More pertinently, at 12,000 miles it’s done very light duties to date, and comes with the 150hp VVC engine and a six-speed ‘box. Yes, it’s a Roadsport, which doesn’t sound like the perfect track car, but no Caterham 7 is ill-equipped for circuit use. This one has a cage and four-point harnesses, and because it’s a Roadsport it does at least have a heater, full-size screen and full weather equipment. That means you could get away without buying the Range Rover and the trailer to ferry it to venues. JH

This is a personal favourite of mine. It’s not a patch on the lightweights and mid-engined cars listed, true, but the Renault Megane RS Trophy is far from out of its depth on track. Of that, be in no doubt. For a start, the 2.0-litre 16-valve motor shoves out 275hp. That’s more than enough, but, if you disagree, then there are plenty of tuning options available to take it higher. And it’s not just engine modifications, because there is all manner of suspension and brake upgrades to choose from as well. Genuinely, though, you don’t have to go spending extra cash. As standard the RS Trophy will circulate lap after lap soaking up the punishment. It has a fantastic front diff that delivers the traction and rotation needed to make it feel alive but the chassis is playful rather than spiky. The Brembo brakes are supreme and the Recaro seats hugging. It is also a car that’ll put a huge smile on your face driving to and from the track as well. And we know how important that is. JH

As you know, the Elise isn’t exactly full of creature comforts, but if you’re after something genuinely light, (but think a Caterham 7 a bit too full on) then an Elise seems like the ideal middleweight ground. And actually this Series I, with its cream leather seats, looks positively plush. Even so, it’s not a heavy car. By keeping the weight down to just 731kg Lotus guaranteed that the original Elise felt fly. With so little weight to move, it didn’t need much power, either. The compact 120hp 1.8-litre K-Series lump can still manage a track-worthy 0-60mph time of six seconds. But it’s the car’s balance and poise that make it shine, and a benchmark for this sextet of track day thrill-a-minutes. Nobody in their right mind drives an Elise without falling in love with its composure and connectedness, all courtesy of a stiff, aluminium tub, double wishbones at each corner and pure, unassisted steering. JH

If there’s a car that promises more entertainment currently for sale on PH, we’ve not seen it yet. Once upon a time, this was a Riley Elf, and it’s hard to imagine a less likely track car. But then it was closely related to the Mini underneath, and we all know what awesome tiny tin-top racers they’ve made. This Elf now promises hours of fun on circuit with a Lynx AE conversion; which means that it’s now powered by a Yamaha R1 engine, with 175hp. In a car that can’t weigh more than a few hundred kilos, it must be hilariously fast. Especially with brakes, suspension and tyres all upgraded, too. The Riley has been so expertly done, in fact, that its two-year conversion to Lynx spec has won it awards. Not that you’ll care about those while tearing past Porsches on track… MB

Talking of Porsches, this list would hardly be complete without one. After all, there’s a reason why every track day is crammed with GT3s, GT4s, Club Sports and Spyders: they’re brilliant. But they’re expensive, too – this Cayman is not, in the grand scheme of things. It’s an original 3.4 S with a manual gearbox, loads of history, and no bore scoring. Recent suspension and brake work mean it should stop and turn as well as ever, too. It should be really, really nice to drive in fact. They always were. And if you’re thinking ‘nice’ doesn’t really cut it in track cars that include a bike-engined Riley, we get it, which is why this Porsche is £5k under budget. Which ought be enough for a proper seat, some sticky tyres, and maybe an exhaust to make the most of that flat six howl. Then it’ll be well on its way to a proper track day Porsche. MB

Yes, a humble M Performance 2 Series rather than the M2 – they’re still out of this budget. Although the 240i may look a little ordinary in this company, all is not quite as it seems, with a few modifications that ought to improve its performance on road and track. It benefits from a Quaife limited-slip diff, Bilstein coilovers and M3 lower control arms, all of which will help take full advantage of the engine’s ample reserves in a way the standard 2 Series couldn’t quite manage. Speaking of which, the 3.0-litre turbo straight six fitted here has been treated to Litchfield’s stage one tune, which should mean in excess of 430hp – more than an M2 Competition. And it’s a manual car, with a short-shift kit. You want a go, right? It might not look like  much, but it promises a whole lotta fun – just as important on track as going fast. MB