Director Monte Hellman has died after succumbing to injuries after a fall, according to the New York Times. Hellman will mostly be remembered for his role in helping grow the New Hollywood film movement of the 1970s. More specifically, Hellman will be idolized for his hand in making one of the most interesting car-centric movies ever filmed: Two-Lane Blacktop. The film starred James Taylor (yes, that James Taylor), Dennis Wilson of the Beach Boys, and Warren Oats.

In the film, the three main actors all played nameless characters. That oddity only sets the tone for what makes Hellman’s most popular work special. It’s akin to Easy Rider, where fate is sealed for our heroes. Society is all-consuming, and no one makes it out alive. Fortunately, Two-Lane Blacktop isn’t as morose as Easy Rider, even though it was reportedly supposed to feature a different, deadlier, ending than what was filmed. 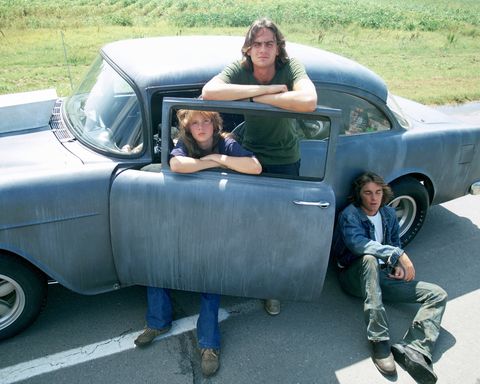 Instead of ending Two-Lane Blacktop with some resolve, Hellman’s approach to wrapping up the film is something that makes it more compelling. For those that haven’t seen the movie—spoiler alert!—it ends with our pop-star heroes doing exactly what they’ve spent the previous 105 minutes doing: racing. While James Taylor is slamming the Muncie four-speed in the now-legendary 1955 Chevrolet in a race against a 1970 Chevrolet El Camino, the film just burns. The implication is that there has been no growth and there will be no end. These characters will keep doing what they have always done.

Hellman’s opus might not be as easily digested as, say, American Graffiti or The Fast and the Furious, but it’s not supposed to be. The sometimes awkward dialogue and the less-than-stellar acting from two American pop-music icons can distract viewers. Even still, all of the gaffes make the movie feel somehow more genuine and raw.

More important to some than capturing the American experience, Two-Lane Blacktop literally captures street racing of the early 1970s. Similar to how American Graffiti encapsulated car culture in the 1960s, Two-Lane Blacktop expertly, if not accidentally, paints a wholly accurate picture of the cars that dominated local streets and drag strips. Most notably, the opening sequence features cameos from members of The Brotherhood of Street Racers and Willie Robinson’s 1969 Dodge Charger Daytona. Even for its idiosyncratic, art-school approach to dialogue and character development, Hellman’s work will stand the test of time at the very least for its accurate depiction of its era.

Two-Lane Blacktop wasn’t Hellman’s only film. His career spanned over half a century, starting with his 1959 directorial debut Beast From the Haunted Cave and closing with a 2013 short film titled Vive L’amour. Hellman also peppered credits on films he didn’t direct, like taking credit as executive produce on Reservoir Dogs and editor of The Wild Angels, to name a few.

Hellman will surely be missed by his loved ones, but his work will live as long as time. The next time you see a primer-gray 1955 Chevrolet or an orbit-orange GTO Judge, you’ll think of Hellman and his opus. If you’ve somehow escaped seeing Two-Lane Blacktop, there’s no better time like the present.

Do you love Two-Lane Blacktop? Did it help you get interested in drag racing? Let us know in the comments below.