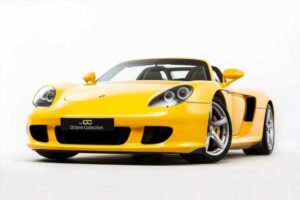 It's unlikely you'll see another yellow CGT in the UK, let alone one that 'only' commands six figures

A couple of years ago, Porsche had the audacity to show off a road-going version of its all-conquering 919 Le Mans car and then tell the world that it wouldn’t be putting it into production. It even had the racer’s highly complex V4 hybrid engine that, while far from tuneful, could be turned up to around 1,000hp when combined with a front-mounted electric motor.

Yes, slapping a highly complex prototype engine in the back of a road car isn’t the easiest thing in the world. But Porsche has already proven that it can successfully migrate its racing tech to the road. Just look at the Carrera GT. That glorious V10 soundtrack is the product of a Le Mans project that could very well have given Audi a run for its money during its reign of dominance.

After back-to-back victories at the ’97 and ’98 24 Hours of Le Mans, Porsche decided to regroup and develop a new prototype for 2000. The plan was to use a naturally aspirated V10 engine that was originally destined for the Footwork Formula 1 team in 1992, which would have made this one of the best sounding Le Mans cars of the era. Alas, the project was scrapped when Porsche had to move engineers over from its motorsport division to work on the Cayenne. A shame, sure, but what we got in return was arguably even better.

No, not the SUV – the stunning Carrera GT. Because you can’t simply waste a good V10, and to prove it the unit in the back of the road car isn’t far from the 5.5-litre ten cylinder used in the Le Mans prototype. Aside from an increase to 5.7 litres for the production model, and all the tweaks needed to meet noise and emission laws, the V10 in the back of the Carrera GT was damn near identical to the one in the unraced LMP car.

That’s reflected in the numbers. We’re looking at 612hp and 435lb ft of torque, which is enough to send you and a terrified passenger from 0-62mph in 3.9 seconds. Even some 20 years on from release, those stats are seriously impressive – especially when you consider that there’s no forced induction to pump up the performance. Moreover, you had to manage it all through a six-speed manual gearbox. It’s notoriously difficult to get the thing off the line, but it’s well worth it have that extra element of control.

What makes this particular Carrera GT even more special than the others is that it’s said to be the only UK example to be finished in Fayence Yellow, which we think suits the CGT rather well. Thankfully, it’s contrasted perfectly with a black leather interior with silver highlights, and you get the iconic beechwood gear lever inspired by old 917 Le Mans racers. Impressively, the car has covered 54,000 miles yet it looks immaculate. The listing claims that there’s minimal wear on the seats, which are backed up by the pictures, and it’s been serviced almost once every year since 2004 at Porsche’s UK HQ in Reading.

Carrera GT values are on a charge at the moment and are quickly rising well above the seven-figure mark. Which makes the £899,995 asking price for this example even more tempting, particularly as it comes in an extremely rare colour and has evidently been well looked after by its previous owner. What’s more, with a few miles on the clock, you can actually take it out for a spin without worrying about depreciation. Just mind that clutch!