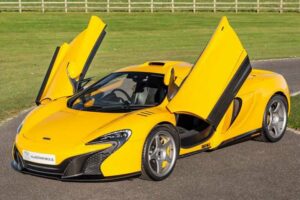 The motorsport-inspired special edition is always a tricky undertaking. Embrace track success with something half-hearted and it looks cynical; go all out for a circuit racer homage and it gets expensive, potentially jeopardising both popularity and profit. The Mercedes-AMG CLK DTM is probably how to do it; the BMW M4 DTM Championship Edition arguably not so much. But even the Mercedes offered a convertible. And the BMW was based on the M4 GTS, which was quite good. See the problem?

McLaren’s advantage when it came to marking its most memorable motorsport victory was that the limited edition would be based on the 650S – and that was brilliant. Occasionally lost in the (justified) frenzy around the 675LT and the 720S, the 650 addressed a lot of the grievances of the 12C while keeping so much of what made it distinctive. The P1-inspired facelift looked good, the ride and handling were further improved, and it was spectacularly, unrelentingly fast. For less than £100,000, nowadays it looks like a heck of a lot of supercar.

This one isn’t a standard 650S, however. It’s a Le Mans – a special edition created in 2015 to mark 20 years since the F1 GTR’s incredible win at the 24 Hours. Though mechanically identical, the Le Mans’ roof scoop, ‘Sarthe Grey’ paint and lovely five-spoke wheels ensured it wouldn’t be mistaken for a standard car. McLaren repeated the makeover for the 720S last year (to celebrate 25 years) but without, arguably, quite the same success – the Le Mans look really suited the 650S.

Now, the eagle-eyed may have noticed this 650S Le Mans isn’t Sarthe Grey, as all 50 of them were intended to be. It is in fact painted Solar Yellow, the same colour as the Harrods F1 GTR; according to the advert, the single owner of this one – a “friend of the McLaren F1 family” – was the only LM owner allowed to deviate from the prescribed colour. Which is pretty cool.

The result, as you might expect given the name of the colour, is eye-catching to say the least. The 650 seemingly presents without blemish, too, despite a healthy 6,000 miles recorded since first registration. (Bear in mind the other two Le Mans for sale on PH have only just past 1,000 miles driven between them.) It’s being sold recently serviced by McLaren and with six months warranty, too.

Furthermore, despite the unique specification, the mileage ensures this 650S Le Mans is actually less expensive than the lesser used cars. Prices range all the way up to £300k, with this Solar Yellow LM offered at £240k. That’s a lot given what the 650S can be bought for – and comfortably into 675LT money, too – but for a one-off McLaren with a link to the Harrods F1 GTR, it doesn’t look bad at all. Especially when a 675LT Carbon Series can be £200k more. And that’s not going to look quite so right at the Bleu Nord.

END_OF_DOCUMENT_TOKEN_TO_BE_REPLACED

Germany’s Autobahn highway network is famed for its unrestricted sections, which allow drivers to set their own pace—no matter how […]