Up to 1100hp from new Hellephant crate lineup 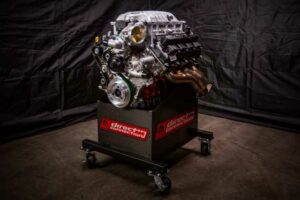 We’ll admit this one isn’t a priority on the UK consumer news front, but it’s very hard to resist writing about enormous crate engines. Probably it’s the kind of American phenomenon we should politely ignore, like giant soft drink containers or NASCAR. But when they offer up 1100hp and are endowed with fantastic names like Hellephant and HurriCrate, it’s hard not to feel a pang of intense jealousy on this side of the Atlantic. Over here we have to get excited about 2.0-litre four pots; over there, Dodge is still merrily attaching superchargers to Gen III HEMI V8s, and selling the result direct.

In fact, it’s now called its performance parts lineup ‘Direct Connection’, and has used the SEMA show to launch the most powerful range of crate engines to date. The core offering is the 426 Supercharged HEMI, which, as before, is 7.0-litres of aluminium block V8 with a lot of supercharger attached. In A30 format you’ll get a 1000hp from premium fuel. But you can also get the A170 variant with an upgraded fuel system that Dodge reckons will deliver 1100hp with E85 petrol in the tank.

Evidently, the Hellephant has been popular because its manufacturer is expanding the lineup to include a 376 cubic-inch – or 6.2-litre – cast iron block, which has been heavily upgraded to produce 900hp on premium gas in C30 spec, or 1000hp with E85 as the C170. Dodge says this V8 features a new 3.0-litre supercharger and improved intercooler, and has been specially modified to improve cylinder pressure capability – not least in the cylinder heads, pistons and connecting rods.

But it’s not all about hulking V8s, primarily meant for the drag strip. The all-new HurriCrate series is based on Stellantis’s 3.0-litre twin-turbocharged straight six, which itself was only introduced in March of this year, and is aimed specifically at people (‘restomod builders’ among them) looking for a high-power-density crate engine, presumably to replace a longitudinal V8 – which is exactly what the Hurricane unit was designed to do elsewhere in the Stellantis lineup.

To that end, the ‘Cat 1’ grade of HurriCrate appears to be a standard output version of the brand-new motor, producing the same 420hp and 468lb ft of torque. It is left to the ‘Cat 3’ version, with uprated Garrett turbochargers and forged aluminium pistons, to output an improved 550hp with 531lb ft available from 3,500rpm. And if those outputs sound a little modest compared to the honking Hellephant, rest assured Dodge already has plans for a racing variant, the HurriCrate Cat X crate. That will doubtless look to grow those figures exponentially.

Or as Tim Kuniskis, the brand’s CEO puts it: “We’re bringing the Hellephant back and adding new HurriCrate engines to augment the Direct Connection lineup with two new families of crate engines. The demand from enthusiasts for performance parts for the street and strip continues grow, and Direct Connection will continue to be there to feed it.” All we need now is an outpost in Milton Keynes next to DHL. Then we’d all be happy.

Up to 1100hp from new Hellephant crate lineup