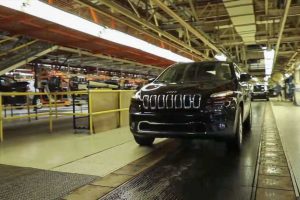 The microchip shortage that has plagued automakers for the past several months will continue to hit home this week, but in a much more noticeable way, as several plants in North America will face temporary stoppages over the shortages.

This week several Stellantis (formerly known separately as FCA and PSA) plants in the US, Canada, and Mexico will be idled for a period that could last several weeks as a result of semiconductor chip shortages from suppliers. They will be the latest plants in North America affected by the shortage, with factories in Warren, Michigan; Brampton and Windsor, Ontario; Belvidere, Illinois, and Toluca, Mexico scheduled to stop production of several popular vehicles including the Ram 1500 pickup and the Jeep Cherokee. Some of these plants have already faced delays earlier this year, as Car and Driver noted in January.

In February, the Belvidere plant that assembles the Jeep Cherokee had already endured a week-long shutdown due to the shortage, as did another Stellantis plant, while Ford has also had to suspend production of the F-150 production in Michigan for a number of days this month.

In the past several weeks a number of automakers with plants overseas have also had to idle production lines, including Toyota, Nissan, Volkswagen, Mitsubishi, Honda, and General Motors, with a number of plants operated by these automakers in the US already feeling the effects.

The chip shortage itself is rooted in the early weeks of the pandemic last spring when the automakers largely shut down, and when suppliers producing microchips for automakers had turned their capacities in the direction of computer and gaming console makers. When the auto industry experienced a sudden bounce-back in most major markets last fall, suppliers were not able to shift away from contracts with these electronics companies, who had experienced rapid growth in consumer demand during lockdowns around the world.

Different automakers have weathered this storm differently so far—some have even stockpiled weeks worth of chips—but the shutdowns at US plants and continued production disruption is expected to continue for months due to these shortages. Some chip makers are already working on expanding their manufacturing footprints, but given the time needed to get new assembly facilities up and running, this is unlikely to have a measurable positive effect for quite some time.

In the meantime, automakers are expected to scramble for chips and endure shortages as the car buying season picks up steam and heads into the summer, just as vaccination campaigns in the US and elsewhere reach a point where demand for new vehicles could seriously ramp up. Just how long these shortages could last is a matter of some debate, but even aside from it, the growth of increasingly complex infotainment systems in cars points to another pressing issue: The semiconductor industry will have to adjust not only to the current shortage, but also prepare for emerging trends in auto manufacturing as a whole, as multiple automakers turn increasingly to tech-heavy electric cars.

Chime in with your thoughts on the current microchip shortage by signing up to leave comments below. We’d love to hear from you.