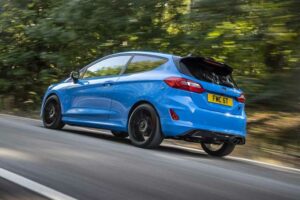 Black cars and Fiestas top the most popular secondhand buys

If you’re like us and spend all day trawling the classifieds (hint hint, head to the PH pages here…), you’ll have been shocked at the hike in used car prices. Or, if you’re selling (ahem, you know where to go) you’ll be pleasantly surprised that your old banger isn’t quite so much of a banger nowadays.

That mostly comes down to the sheer demand of people finally coming out of lockdown and getting excited to be back on the road again. In fact, industry big-bods SMMT has released its quarterly figures of analysis of the market. Stat fans, get excited; the used market as a whole grew over 108% in the second quarter of the year, with 2.1 million cars changing hands, those at PistonHeads HQ contributing to one or two of those.

It’ll be no surprise, either, that electric and plug-in hybrid cars are also increasing in demand across the classifieds. Although we’ll admit there’s probably less of those floating around in the PH used car lot. That said, don’t start on the “gonna change your name to BatteryHeads then!?” – 96% of sales are still running on that delicious petrol and diesel.

The fun data lies with what has been the best sellers, though – topping the most popular models making their way through the tyre-kicking rigmarole is the Ford Fiesta, followed by the Vauxhall Corsa and Ford Focus. Nice, wholesome family cars. Unsurprisingly, 911 GT3s didn’t feature, which is hard to believe when you read the excitement of used models in the forums… Only 12.7% of car exchanges were on models three years old or under, showing our old favourites are, indeed, still favourites.

Black, silver and blue cars top the most popular colours in the successful used car sales haul, which is pretty standard given the desire to keep resale values higher. We believe it was Oscar Wilde that said: “mere colour, unspoiled by meaning… can speak to the soul in a thousand different ways.” He would be unimpressed with Ford’s ‘Magnetic’ or Vauxhall’s ‘Diamond Black’ colourways, then.

Buy a used car? Thinking of selling yours? Let us know down below your experience this post-pandemic season.