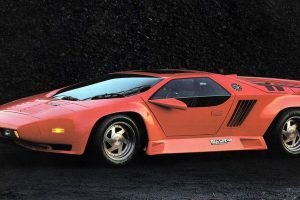 Even as far as start-up supercar companies go, Vector’s backstory is a weird one, although its origins are ordinary enough. Born in Dearborn, Michigan, the home of Ford, Wiegert went on to found Hollywood-based Vehicle Design Force in 1971. By 1978 it had morphed into Vector, which had a working prototype – the W2.

The car was tested extensively, evolving into the W8, which went into production in 1989. It had all the hallmarks of a proper supercar, like exotic materials (carbon fibre and kevlar body panels), silly doors (scissor) and plenty of power (625bhp). Providing propulsion was a mid-transverse-mounted V8 hooked up to a three-speed automatic gearbox, giving a claimed top speed of 242mph based on the exploits of the W2 at the Bonneville Salt Flats. That said, magazines were apparently told not to attempt taking the W8 beyond 200mph.

Just 22 were built, one of which was bought by Andre Agassi. The tennis ace wasn’t too impressed with the supercar he’d spent $400,000 on, which torched its carpets on a drive in the desert near his Las Vegas home. His brother Phil described it as “basically a death-trap,” and fearful of its potential to turn into a fireball, Agassi returned it and asked for his money back.

In producing these few supercars, Vector haemorrhaged $29 million. A company called MegaTech came to the rescue, ploughing millions of dollars of investment into the floundering car firm. The money dried up, though, and Vector’s financial position was once again looking precarious. The board of directors voted to have Wiegert removed (he later claimed some of the directors had been bribed).

Fighting for control of his company, Wiegert changed the factory’s locks, shut himself inside, and employed armed guards. In the end, it didn’t work – the decision was made in court, and it went MegaTech’s way, dashing Wiegert’s hope of putting the W8-succeeding WX-3 into production.

MegaTech boss Tommy Suharto, now a convicted murderer, then set to work on the M12. It was built using various bits and pieces from Suharto’s other automotive concern, Lamborghini. The main pieces of the puzzle from Lambo were a modified Diablo platform and a 5.7-litre 500bhp V12, although there were some less exotic bits, including a steering wheel from a Ford Taurus.

The M12 wasn’t a success, though. Only 17 were built, 14 of which were full production vehicles. The car met its end in 1998 when Lamborghini was sold to Audi. The M12’s parts supply was gone and plans to use a GM V8 instead never got off the drawing board.

Weigert stepped in to save his company, buying up the assets and forming Vector Motors. Another production Vector supercar wasn’t to be, though. A 1850bhp, 10.0-litre V8-powered prototype called the WX-8 was revealed in 2008, and at the time of writing it’s still proudly displayed on Vector’s website, even though it never became a production reality.

According to Weigert’s publicist, Motor Authority reports, the man was “working on new projects” at the time of his death. He had business interests outside of automotive, founding motorised water sports company Aquajet in the 1990s.

Weigert’s efforts to build supercars may have been largely unsuccessful, but Vector still managed to capture the imagination of many. Thanks to memorable magazine features and later video game appearances, Vector, against all odds, is about as close to a household name as you could expect a patchy start-up supercar firm to be.