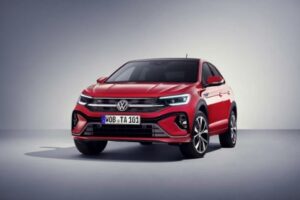 The Taigo will be manufactured at Volkswagen’s plant in Spain.

Volkswagen has unveiled the Taigo compact crossover for the European market. The Taigo is essentially the Nivus crossover, which has been on sale in the South American markets since last year.

The Taigo crossover will, however, receive a few minor tweaks for the European market. It retains the coupe-like sloping roofline at the rear, which eats into the boot space, especially compared to its T-Cross sibling. The Volkswagen Taigo offers 438 litres of boot space, compared to the 455 litres of the T-Cross.

The Taigo will be manufactured at Volkswagen’s plant in Spain. The compact crossover is based on Volkswagen MQB-A0 platform and measures 4,266 mm in length, 1,757 mm in width and 1,494 mm in height. It has a wheelbase of 2,566 mm.

The interiors of the Volkswagen Taigo are similar to the latest-gen versions of the Polo and T-Cross. The Taigo features a fully digital instrument cluster, 6.5-inch (9.2-inch optional) touchscreen infotainment system with Apple CarPlay & Android Auto, touch-sensitive climate control and Volkswagen’s IQ.Drive package among other features.

The Volkswagen Taigo will be available with a choice of two petrol engines. The first is a 1.0-litre, 3-cylinder, TSI unit producing either 94 BHP or 109 BHP. The latter is a 1.5-litre, TSI engine churning out 148 BHP. Depending on the engines configuration, the Taigo will be offered with either a 5-speed manual, 6-speed manual or a 7-speed DSG automatic transmission and front-wheel drive.

The Taigo will be priced higher than the T-Cross. Deliveries are expected to begin in early 2022.