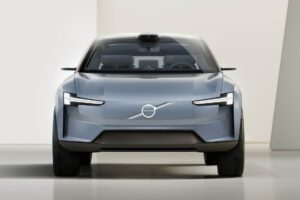 The Volvo Concept Recharge heralds a new era for the brand, and maybe for the industry—one in which platforms are engineered for evolution. Lots of cars offer over-the-air software updates to keep customers engaged in, and in love with, their vehicles. But in the fast-moving automotive future, keeping a car’s technology current will require more than just freshened code. So Volvo envisions planning and packaging its cars with an expectation of periodic hardware updates as well.

Volvo’s chief executive officer Håkan Samuelsson said, “If a car is to live for, let’s say 10 years, I don’t see computing hardware living that long. If you could upgrade maybe after half that time, you could give the car even more functionality in the last five years.” The sentiment was echoed by Mickey Kataria, the director of product management at—Volvo’s electrical architecture partner—Google. “I think we’ll have to introduce some notion of hardware upgradability,” adding this bit of context: “People already upgrade the tires over a car’s lifetime, so it’s a natural concept to bring to the computer as well.”

Volvo Concept Recharge likely previews the design language the brand plans to use on its large premium SUV, which is due to arrive next year. It will introduce these and other new electric vehicle architectural concepts to the brand, as well as underpin the next generation of Volvo models. The vehicle is so new and so vital to Volvo’s future that the brand is scrapping its alphanumeric nomenclature. “This car will have a name, more like a child,” proud papa Samuelsson said.

Relative to the Volvo XC90, the Concept Recharge’s wheels are moved closer to the corners, which leaves more space for the large, long-range battery pack that forms the structural floor of the vehicle. This floor is actually low enough to provide the expected headroom and visibility of today’s SUVs while integrating a lower, more aerodynamic roofline. The A-pillars move forward and the seats are spread out a bit due to the extra space afforded by not having a combustion engine consuming space within the Concept Recharge’s front end. There is no radiator grille on this concept as there’s no hot engine to cool. Instead, a shield-like surface carries the iconic Volvo iron mark.

The daytime running light signature of the Volvo Concept Recharge is unmistakable as the brand’s so-called “Thor’s Hammer” design by day, but by night the “hammer handles” part horizontally like eyelids, allowing a half-dozen LED headlamps to emerge. The rear lighting signature similarly incorporates the vertical signature of most recent Volvos, with a horizontal element that helps frame a recessed panel on the hatch. On the concept, the lamps extend at speed to assist with air-flow separation, but we’re not holding our breath for that feature to make production. We do expect the exterior lighting animation to survive—possibly with a variety of downloadable versions for customers to choose from.

Swathed in natural and sustainable materials, including a very thin wood veneer through which ambient lighting can be projected, the interior vibe of the Concept Recharge is very much minimalist Scandinavian chic. Safe, simple, and serene were the watchwords for the user-interface architects. Critical information is displayed on a large head-up display, augmented by a comparatively small and reconfigurable digital instrument cluster, with most infotainment handled by the large 15.0-inch vertical touchscreen on the center stack. Information presented on it is divided into a large display of navigation, with frequently accessed items arranged in three zones beneath it, each of which can be expanded.

The front seats are mounted to pedestals to provide maximum rear foot room, and the entire seat cushion of each rear captain’s chair can elevate to put smaller children up at a safer height. A footrest elevates with the chairs. Here again, a welcome lighting animation greets occupants. Do not count on the rear-hinged rear doors and the absence of a B-pillar to see the light of day—these are strictly concept car bits.

Look above the center of the windshield and you’ll notice a bump. This is where the concept’s Luminar lidar unit resides, providing a more weather-tolerant sensing system to contribute to the car’s 360-degree sensor suite. Volvo plans to make this feature standard long before it begins marketing any level of unsupervised autonomy, and the system will be programmed to intervene and not just warn the driver in instances where a crash is deemed imminent. The company believes so strongly in the system’s ability to help prevent accidents that it plans to eventually make the system standard across its range, noting, “We wouldn’t sell an airbag or seatbelt as an option.”

That said, this system will soon permit “Level 3” type conditional hands-off-the-wheel eyes-on-the-road autonomy, much like the Super Cruise system of General Motors. Volvo currently refers to this setup as “Ride.” The system will initially work only on certain highways, just like Super Cruise. Volvo will ensure the driver remains ready to resume control by using two driver-monitoring cameras (one located near the center of the car and another near the A-pillar), plus a capacitive-touch steering wheel. This should ensure against would-be rear-seat movie-watching “drivers.” While Volvo won’t take thousands of your dollars now in exchange for the promise of full autonomy sometime in the future, we fully expect Volvo to eventually market such functionality via software (and possibly hardware) upgrades.

Initial applications of this new technology will rely on two “brains”—or core computers—running an Android operating system that connects to perhaps 100 electronic control units connected via ethernet. One concentrates on vehicle control, the other is more focused on safety sensing equipment and Ride mode. The second generation of this setup will eventually merge these into a single unit for more efficient cooling and control. These systems manage all machine learning and the core computing that regulates the behavior of the vehicle.

Leveraging the latest technology from Swedish battery partner Northvolt, Volvo claims its next generation of batteries will feature 20 percent more energy. Pure lithium anodes and state-of-the-art solid-state electrolytes promise 1,000 watt-hours/liter in the third-generation batteries that are expected to arrive within the second half of this decade. CEO Peter Carlson pointed out that because Northvolt’s battery factory is located in an area of Sweden with hydropower, the company can zero-out half the carbon footprint typically attributed to the manufacturing of batteries. Additionally, Northvolt is working to source recycled materials to lower the remaining carbon footprint of its batteries.

The next generation of Volvos will also have a more holistic mobile phone app that can connect the driver to more than one Volvo vehicle, to any home automation personal assistant, as well as to any charging payment apps.

When Can I Buy a Volvo Recharge?

You’ll never get a crack at this exact vehicle, but a large battery electric SUV with a real name (probably not Recharge) will arrive in 2022 sporting the first production application of lidar that isn’t in some fully autonomous robotaxi or shuttle. Keep it for 10 years and heaven knows what it’ll be capable of doing. That is, as long as you keep paying to keep its “brain” and “muscles” up to date.