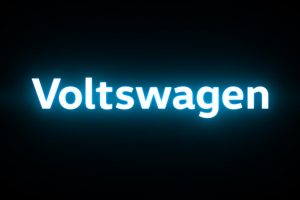 And you thought April Fools wasn't until Thursday…

UPDATE, 31/03/21:
VW has confirmed that ‘Voltswagen’ was a marketing stunt, and not a strategy move. We’re still trying to work out who looks sillier out of it. Wonder what actual April Fool’s will bring… MB

ORIGINAL STORY, AS REPORTED 30/03/21:
As any kind of car enthusiast, you’d be hard pressed not to have noticed Volkswagen’s enormous electrification push of late. There’s the ID.3 and ID.4 moving electric VWs into the mainstream, the Touareg R introducing plug-in flagships and plenty more besides – it’s a premediated roll-out of vast scale.

Predictably, VW – the shorthand will remain – sees the change as rather more significant than just substituting ‘k’ for ‘t’. Indeed it’s nothing less, apparently, than a “public declaration of the company’s future forward investment in e-mobility.” The release continues: “The new name and branding symbolize the highly charged forward momentum Voltswagen has put in motion, pursuing a goal of moving all people point-to-point with EVs.” We all knew VW had to clean up its image in the US post-you-know-what, but this is pretty drastic move even with that requirement. All VW EVs will receive ‘Voltswagen’ badges in a new Light Blue font, with combustion-engined cars only carrying the VW emblem. Even the signs at VW dealers will change.

“The tone of Voltswagen will be a consistent thread between the branded communications for our growing electric fleet to our gas vehicles. Over the course of the next few months, you will see the brand transition at all consumer touch points. This is an exciting moment for us, and we have been working through every avenue to make the transition clear, consistent, seamless and fun for all”, said Kimberley Gardiner, senior VP of Volks… Voltswagen of America brand marketing. It would really appear that this isn’t a drill, despite the unfortunate timing.

The name change, which is only happening in the US, arrives with the ID.4, VW’s first global EV and the first to be found in American dealerships. That car is a key part of VW’s global plan to sell a million EVs globally by 2025; VW says 70 electric vehicles will be launched by the group brands by 2029. It’s certainly one way to banish any recollection of the past.

Scott Keogh, Voltswagen of America’s CEO, said: “The idea of a ‘people’s car’ is the very fabric of our being. We have said, from the beginning of our shift to an electric future, that we will build EVs for the millions, not just millionaires. This name change signifies a nod to our past as the peoples’ car and our firm belief that our future is in being the peoples’ electric car.” And you thought VW simply building electric cars was a big step.