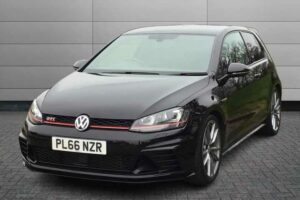 All the while we see fantastic cars cooped up in collections, accruing value rather than miles. And while we should all do whatever the heck we like with our money, it does seem a shame not to enjoy vehicles for the job they were designed to do. Not least when, for the really good stuff, getting out and driving it will have a minimal effect on value – but potentially make you love the car even more.

Take this Golf. That’s not a mistake, either, this is very much intended as one of the great driver’s cars of recent years, because it’s a GTI Clubsport S – more on that in a sec. The important thing to note for now is that it’s recorded 44,000 miles in the past five years, which is pretty good going for a two-seat VW GTI that many saw as a bit daft at launch. Yet it remains for sale at £29,995, because it’s far more special than the exterior would lead many believe. For a car that cost £34k new, we’d call that very good value for money. Contrast that to the super low mileage examples that exist, for sale at just over £40k with barely two thousand miles driven. Surely we’d all rather enjoy one of the great modern hot hatches and still have a £30k asset, than treat a Golf with kid gloves for the sake of a few grand?

Maybe that point is up for a broader discussion one day. Life would be boring if we all liked the same thing, and there’d be no low mileage cars if everybody was out thrashing them every day. What isn’t up for any debate is the star quality of the Golf Clubsport S, a car that arguably gets more special with each passing day. Snuck through before the ramifications of Dieselgate had really hit home, it was an incredible project: just 400 were made, all three-door, two-seat, manual Golf GTIs. Remarkable enough in the current context, but there was so much more to it than that. The CS had power upped to an R-equalling 310hp, yet was lighter than any other fast Golf thanks to the missing rear bench; it got its own aluminium front subframe for increased negative camber; Michelin Cup 2 tyres were standard (on a Golf!); and the Nurburgring humbling suspension setting was hidden in the Individual drive mode.

The Clubsport S was chock full of the nerdy details we love to see on low volume track specials, yet packed into a Golf GTI – the predictable, everyman hot hatch choice. Having secured a Nurburgring lap record with a 7:49 (beating the Civic Type R), VW then went a couple of seconds quicker, just because it could. This was a Golf capable of 7:47 at the Nurburgring, yet also enormous fun on the road. It was a Golf GTI, and it was cool.

That the Clubsport S was so subtle, that it was the very opposite of a stickered up Megane or bespoilered Civic, certainly enhanced that impression, but arguably did its achievements a disservice. Because it was just a Golf GTI to most people, not one of the best front-drive cars ever. And yes, that’s a hill your correspondent is willing to die on. It was even quite good at still just being a Golf GTI, albeit a two seat-one, nicely assembled and admirably refined.

It can seem like a lot of people still don’t know (or care) about the CS, which seems a shame given three-door Golf GTIs are dead and manuals can’t be far behind. VW’s next Nurburgring record isn’t going to be for a like this, if for anything. Even the PH classifieds super computer hasn’t clocked it, recording it as a 265hp Clubsport rather than a 310hp, 164mph record breaker. The dealer doesn’t seem to know what it has on its hands either, though Park’s Honda Ayr can probably be let off not knowing about a Golf of which there are only another 149 in the UK. Maybe the old owner traded this in for a Civic Type R, because they love unforgettable front-drive hot hatches – a good upgrade. Whatever the case, the Clubsport S ought to make an awesome car for its next buyer, and seemingly a very safe space for their money as well – even if everyone else will just see a Golf.