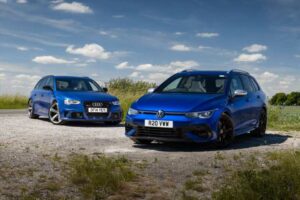 Cars have changed a fair bit in the past decade – what's that meant for the fast estate?

Before you head straight to the comments, we know – this isn’t a conventional twin test. The vast majority of buyers looking at spending a few hundred quid a month on a Golf R aren’t also weighing up the merits of an old Audi V8 with tens of thousands of miles on it. We know that, you know that, but the parallels were too intriguing to ignore.

Plus, well, what do you compare a Golf estate to? Leon v Octavia has been done if one of those appeals more. A Focus ST is a riot, but its usefulness to a wider buying public is hampered by front-wheel drive and a standard manual (or sluggish automatic); all-wheel drive and a good automatic are where it’s at if you want the all-weather performance that is a hallmark of the genre.

And if coming at the challenge from very different places, the Golf and RS4 are certainly comparable. Just 7lb ft separates 2.0-litre turbo four from 4.2 V8; the Audi is 75mm longer, a little wider and a smidge lower. They’re within two tenths of each other on the 0-62mph sprint, only come with seven-speed dual-clutch gearboxes and both have the option of torque splitting rear differentials. (This Audi had the Sport Differential ticked when new; this Golf goes without VW’s R Torque Vectoring.) Even Sepang and Lapiz Blue are uncannily close. The biggest spec sheet differences are the Golf’s bigger boot, the RS4’s chunkier kerbweight. And one engine that has twice the size and swept capacity of the other…

We’ll get to that, promise. However proceedings must begin with the rest of the old stager, this car having been off sale so long its replacement is now due for renewal. Time has done absolutely nothing to make the B8 any less handsome – it really is a great looking fast Audi, the time-honoured tradition of box arches, big wheels and a suggestive ride height still working wonders on a basic shape launched 15 years ago. To these eyes it’s more modern than the B7 and less fussy than the B9, and still something that would make a new owner smile at it on the drive without attracting too much unwanted attention. There’s presence, but it isn’t indiscreet. Which is just how we like it.

Same goes for inside. The RS4 is marked out as special if you know where to look – at a 9,000rpm (!) rev counter, for one – rather than having its schportiness rammed down your throat at every opportunity. Some shiny trim identifies this Audi out as used and the resolution of its screens belies the age, but a cabin that probably looked a bit button heavy and staid a decade ago remains eminently agreeable in 2022. The Golf’s interior won’t age so well. Because it’s crap already.

The Audi feels resolutely tough, too; the interior doesn’t squeak or rattle at all. Which is some achievement given how the car rides; any hope that something termed ‘absurdly harsh’ on PH back in 2012 might have mellowed lasts one small road imperfection. In Dynamic mode, on the big wheels, the old bus is far from its best, with crazy heavy and surprisingly slow steering thrown into the mix as well.

There’s probably an Individual setting that works, and Comfort is a good catch-all default, but it’s clear from the off that the B8 – for all its configurability and technology – lacks the dynamic cohesion that marked out the passively suspended, drive select-less B7 as something special. Which is probably why people weren’t necessarily very kind about this car in 2012. But there are some really good bits to unearth ten years on: the brake pedal feel is nice, it’s less nose-heavy than the layout would have you imagine and, with some patience, the Sport Diff can be felt pushing the car around a corner rather than it just being pulled out by the front end. Manifestly the RS4 has too much weight (and too much of it up front) to really enjoy gung-ho hustling, but slow in and brisk out shows off its qualities far better.

Of course, you’ll be mostly thinking about the engine anyway. Viewed from the 2022, it’s nothing short of exquisite. Incredible to think that as recently as 2014 buyers could choose between a C-Class estate with a 6.2-litre V8 and an Audi Avant with an 8,500rpm equivalent; they feel like such exotic, supercar-suitable engines that it’s almost impossible now to fathom them ever being offered in humdrum family cars. That incongruity is why we loved them, though, and the RS4 is no less compelling driven now – even if the cost of super unleaded suddenly makes it harder than ever to justify.

Granted, the atmospheric 4.2 is not the torquiest engine in the world – in fact, it’s probably slower than the Golf in 90 per cent of situations – but you won’t ever engage with the four-pot like this. Factor in a dual-clutch ‘box that is snappier than the Golf’s, despite the age difference, and you’re never more than a throttle prod from the really, really good bit. Peak power is made beyond 8,000rpm, and the RS4 really feels worth extending out there, good for all 450 horsepower once the effort is put in. Okay, perhaps the fast family estate should be about the minimum of effort for maximum reward, and maybe high-revving engines are best suited to lightweight cars – but an opportunity to experience a V8 like this in any format, to rejoice in the way it revs with zeal beyond 8,000rpm, is to remind yourself of internal combustion’s considerable and unrepeatable joy. Even when it’s not possible to chase the limiter, just the knowledge of its potential – that an engine so rapaciously revvy and sweet sounding lies in front of you – is properly thrilling. Perhaps we haven’t driven enough V8s of late, and maybe the torque of a hot hatch and the weight of an SUV would eventually get tiresome, yet it makes the Audi feel special even when nothing special is occurring. This is the hallmark of the V8-way.

All of which suggest the Golf is about as fun as peak time commuting, right? Actually, no. Sure, after 4.2 litres of waking dream, the VW’s 2.0-litre EA888 evo4 – never the most emotive four-cylinder anyway – might as well be a lawnmower motor. Nevertheless, there is no question that the R is the better car to drive. Obviously new cars always have an advantage over used ones thanks to box-fresh components; still, it’s hard to imagine even a brand-new B8 RS4 getting down a road this well.

It feels far lighter than even the spec sheet difference would imply, with all the benefits that a lower mass – and what we can only assume is a massive upgrade in torsional stiffness – typically confers. The Golf is more willing to change direction, less ponderous in every part of the turn and accelerates that bit harder as well. Only when the Audi is furiously combusting the kids’ inheritance over the epic final few revs does it seem demonstrably quicker.

Perhaps more importantly, though, the Golf actually gives the driver back more than the V8-touting senior. This is all relative, of course – an AMG CLA Shooting Brake is another level of involvement again – but of these two it’s the Golf that has the keener front end (with a clearer relationship between what the steering wheel and the tyres are doing), a more neutral balance (perhaps no great surprise) and a four-wheel drive system further inclined to divert power back than forwards to slingshot around a corner. The Mk8 is a tangible improvement on the Mk7 Golf R wagon, and comfortably more fun than the Audi – while being infinitely more comfortable. Often lost in the complaints about the price, styling and interior (valid though that criticism remains) is the fact that this R Estate is a consummate all-rounder. Back-to-back comparison with an Audi icon only serves to highlight how good it really is.

But fresh-faced driving vitality isn’t quite the whole story. The way the Audi looks and sounds would make you happy to own it every single day, without even getting in or moving an inch. The flagship Golf wagon, costlier than ever, never really tugs at the heartstrings, compels you to stare a bit longer or drive a little further. That’s not some trope about old cars and character, either; the experience of a Focus ST Estate would live longer in the memory, for good and bad reasons.

Perhaps that’s the nub; even at inflated used car prices, you could pay what Hofmanns of Henley wants for this Audi and feel content for as long as you could keep it brimmed with V-Power. It isn’t perfect, but some money spent on dampers and smaller wheels would surely help a great deal. The new R, on the other hand, even for one so accomplished, looks expensive on paper and never quite feels it. Even allowing for the fact that old versus new features inevitably tend to favour the secondhand car – especially when the old one was more expensive to start with – the Golf too obviously lacks those special touches that make premium models worth paying for. The driving experience is very good indeed, but the R doesn’t look or sound or seduce like a £50k car should. And that’s a shame.

If nothing else though, it does confirm that rapid and capacious are not mutually exclusive traits, and are very much alive and well – after all, the VW can carry more stuff just as fast (if not a bit faster) than the RS4 while using a lot (lot) less fuel. Moreover, should Audi follow the Mercedes-AMG furrow and deliver a four-cylinder hybrid in the next version, they could learn something (if not everything) about how it should drive from the Golf. Really. Because something like the R with 550hp, some really clever torque vectoring and a serviceable interior would be stupendous. As for VW, if ever a reminder was needed of how to make its future fast compact estates properly desirable, it need look no further than Audi’s very recent past. Even without peering under the bonnet…

Huge thanks to Hofmanns for their help with this feature – the RS4 is for sale here.