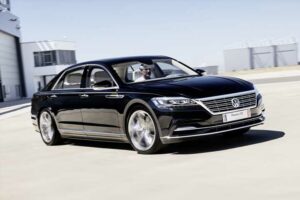 Despite it all, there was a Mk2 Phaeton lined up – here's what might have been

Plenty has changed in the automotive world over the past 20 years, surely much more than the 20 years which came before 2002. Now, looking back on the heady days of the early 21st century, nothing quite seems so of its time as the VW Phaeton. Even then we knew that mass market manufacturers struggled in the premium space, but this was Piech-era VW, and so the move to luxury was going to be made with a W12-engined four-door saloon. A 6.0-litre, 12-cylinder Volkswagen saloon to take on the best from Bentley, BMW, Rolls-Royce, Mercedes and the rest still seems barmy – like we said, of its time.

Now it’s 20 years since the first Phaeton, VW has shown what might have been had the second generation been given the green light. This ‘D2’ car was conceived in 2016, and was very close to production; it was based on the MLB platform and had a functioning interior with plenty of the features still being seen today. It was the Phaeton concept chosen out of four possible cars, and would have made production it seems – China surely would have lapped it up – were it not for the Dieselgate fallout. 2016 was about the time VW committed to its all electric future, and a new luxury saloon with petrol power didn’t really fit with that vision. Normally that might be a pity, though it’s hard to imagine many too upset at being denied the opportunity to experience Phaeton Mk2.

The original remains a significant car however, at least from VW’s perspective. To talk of the brand pre- and post-Phaeton is a bit much, not least given the modest sales success and the winding up of production many years ago, but there really was nothing more suave than a Passat in the VW range pre-2002. If not exactly setting the market on fire, the saloon proved VW’s willingness and commitment to more opulent cars. “The Phaeton acted as a shining star that benefited the whole brand and paved the way for other premium products such as the Touareg and Arteon”, says VW. Would those cars have happened without the Phaeton having gone first?

Amazingly, too, the original soldiered on from 2002 to 2016, reflecting its popularity in other markets; apparently a 2010 facelift, keeping the car going to 2014, “was especially popular among customers in China.” That must have been a market in mind with this D2, with its prominent grille and plush rear quarters. Let’s not forget, either, that the Phaeton ushered in some notable technology, even if buyers seemed to prefer having that equipment in a luxury saloon with a more prestigious badge. Stuff like ceramic brakes, Rear Assist and touchscreen infotainment will all have been in the Phaeton first – it even had self-luminous numberplates at one point. This was an almost entirely hand-made luxury saloon decked out in the finest materials, albeit one with a humble badge.

And, of course, there was a V10 diesel Phaeton. For that reason alone, the big Vee-Dub will always hold a small if special place in the hearts of enthusiasts. Again, nothing quite says Piech-era VW like a 5.0-litre, 10-cylinder oil burner with 313hp and 552lb ft – big numbers for a diesel today, leave alone 20 years ago – and it remains one of those curios we’re rather glad existed. Even if it would be very courageous to own one – our Touareg Brave Pill with the same engine was the most read BP of 2020.

Naturally, the current crop of VW designers are very kind about this Phaeton, despite what might be best be called a conservative look – even for 2016. “The car still has a very attractive appearance and beautiful proportions, and it impresses with its tangible high quality and value”, said Jozef Kaban, Head of VW Design. Right. Still doesn’t seem like one we’ll be revisiting in years to come, though it’s interesting to see just how close Volkswagen came to replacing the Phaeton. An important reminder that European commercial success is not the same as global. Those that do fancy a taste of the high life for modest outlay will be pleased to know the first and only Phaeton remains cheap 20 years on; this V6 TDI has been owned by a husband and wife since new, with fewer than 80,000 miles – it’s £5,995.