Two incredible builds. One drag strip. Like in Highlander, there can be only one car left in one piece. (Sort of.)

In this episode of Hoonicorn Vs. the World, Ken Block pits his 1965 Ford Mustang Hoonicorn RTR up against Rob Dahm’s turbocharged four-rotor FD-generation Mazda RX-7. It’s 1,400 twin-turbo V8 horsepower in a 2,998-lb Hoonicorn versus 1,240 hp from a giant-turbo’d quad-rotor rotary in the 3,300-lb RX-7. Both cars have ultra-quick-shifting six-speed sequential gearboxes and all-wheel drive.

On paper, it’s an interesting, almost even match, with perhaps a bit of a nod to the Hoonicorn if its engine wasn’t a little down on power from what the Hoonigans suspect is it running on just seven of its eight cylinders. Dahm’s build was even inspired by the Hoonicorn, right down to the suspension geometry. Dahm even pretended to be from Hoonigan to source a few parts, which is balls-the-size-of-Alaska incredible. It’s also Dahm’s baby—not much is left that came stock on the now-six-inch-longer RX-7, but he’s had the car it’s based on since he was 19.

Dahm’s car is very much a work in progress as it doesn’t have a full floor yet—you can see right down to the ground inside. Dahm even runs with a laptop that manages the car’s tuning in the passenger space. The RX-7 has barely been shaken down, and they even opt to do a rolling start on the first two races for their 1,000-foot drag races out of mercy for Dahm’s untested car. 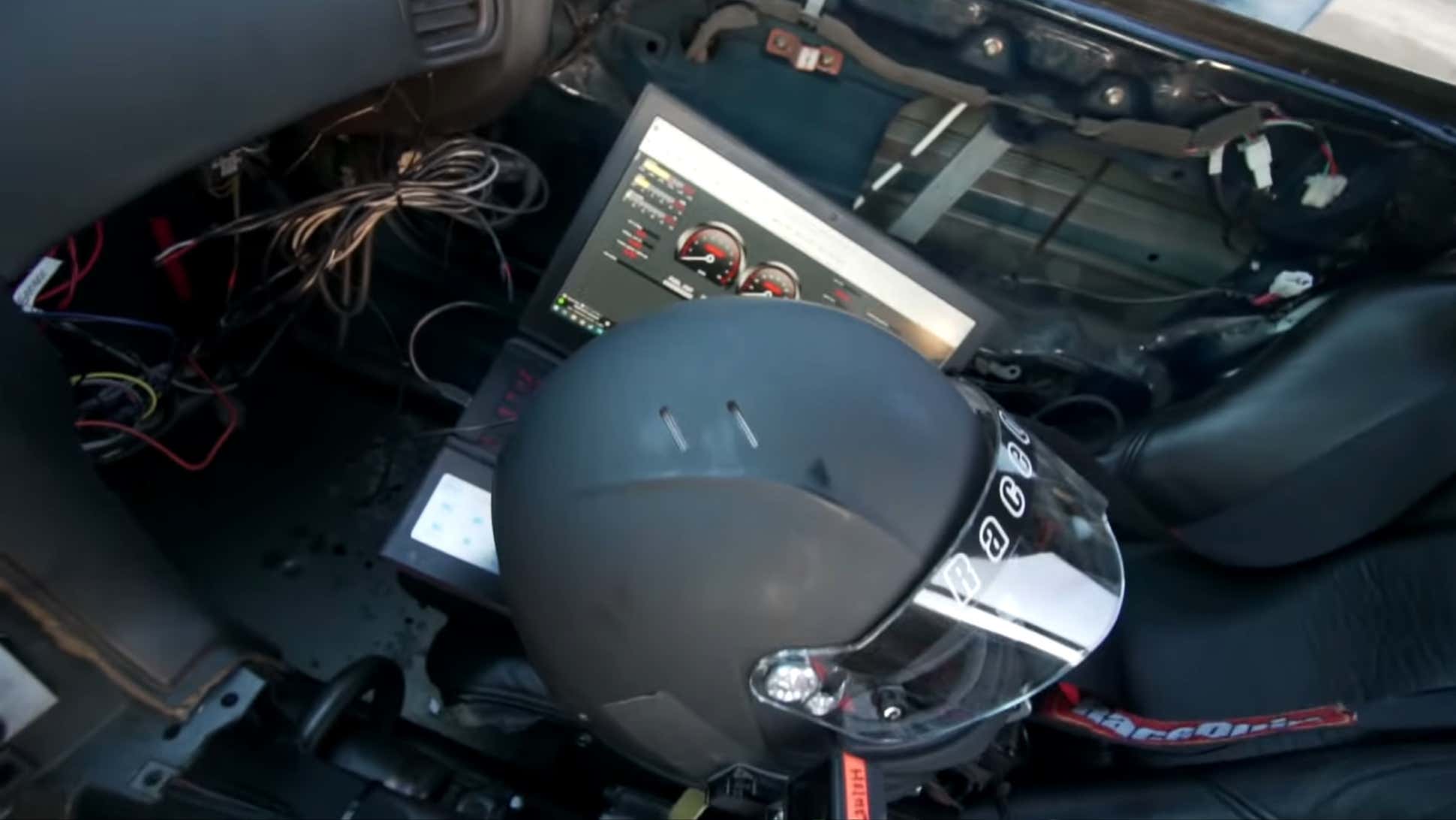 Oh, bless Rob’s heart. That was some foreshadowing.

The Hoonicorn left the Rotor-corn in its dust, and there’s a particularly ominous shot of the RX-7’s hood popping up at the end. Turns out, that was the hood of the RX-7 flying up. Welds on Dahm’s hood busted in the process, leading it to pop onto the windshield (which miraculously didn’t break), dent the roof and bust out the entire rear window of the RX-7.

Block’s reaction of “that’s rally” is pretty priceless. That would not stop a rally or rallycross driver (like Ken), and nor did it stop Rob Dahm in this race. 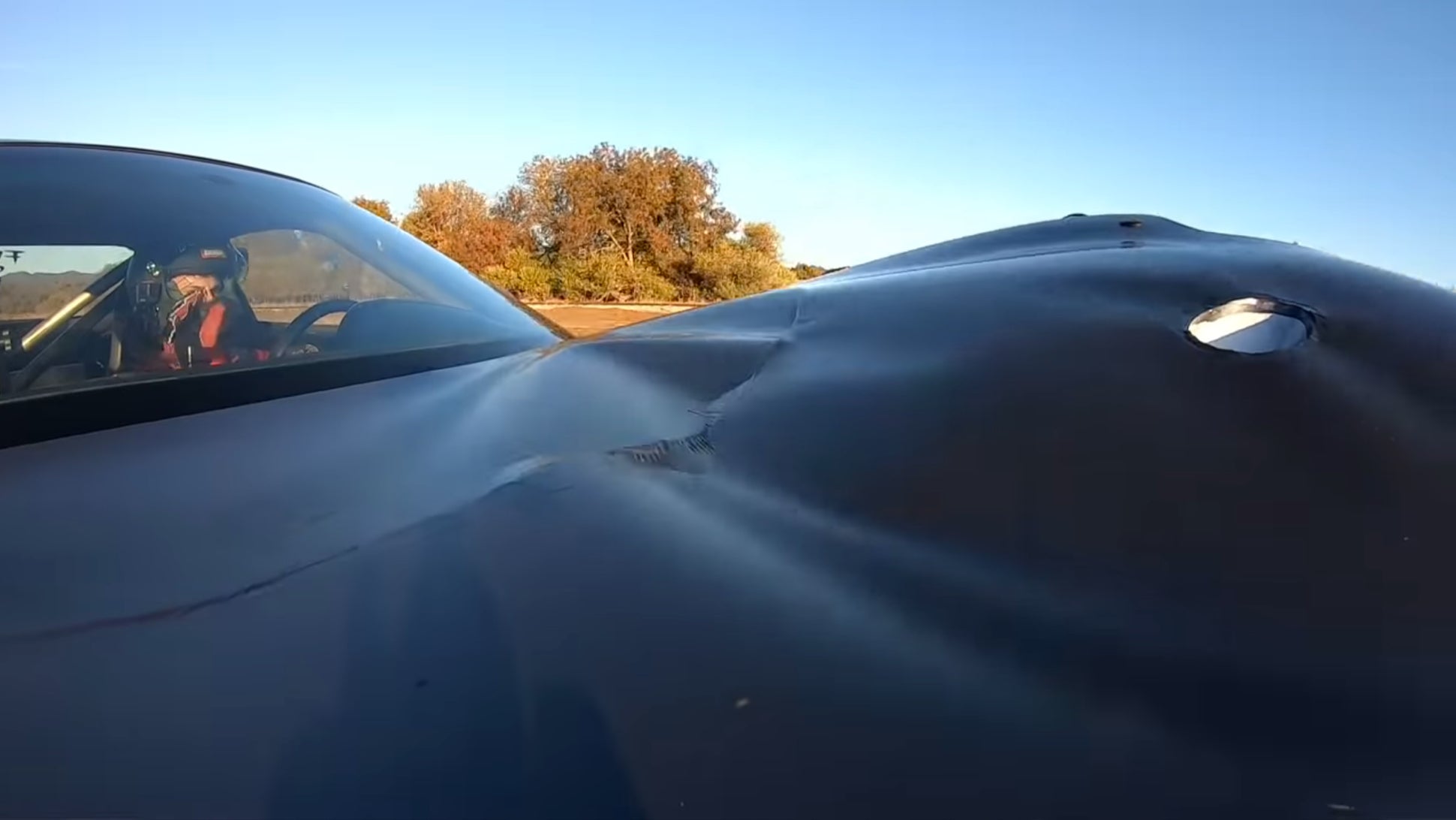 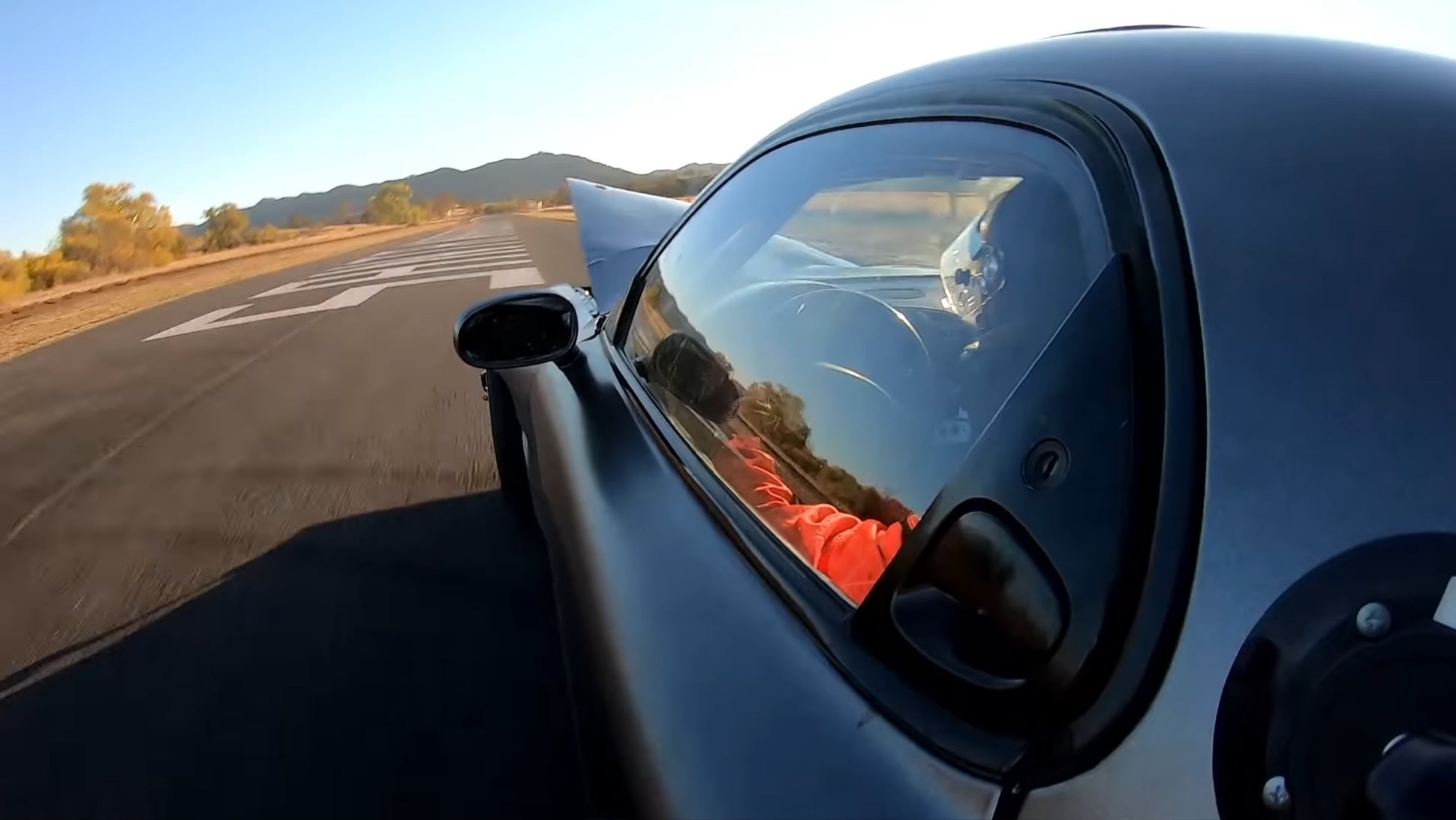 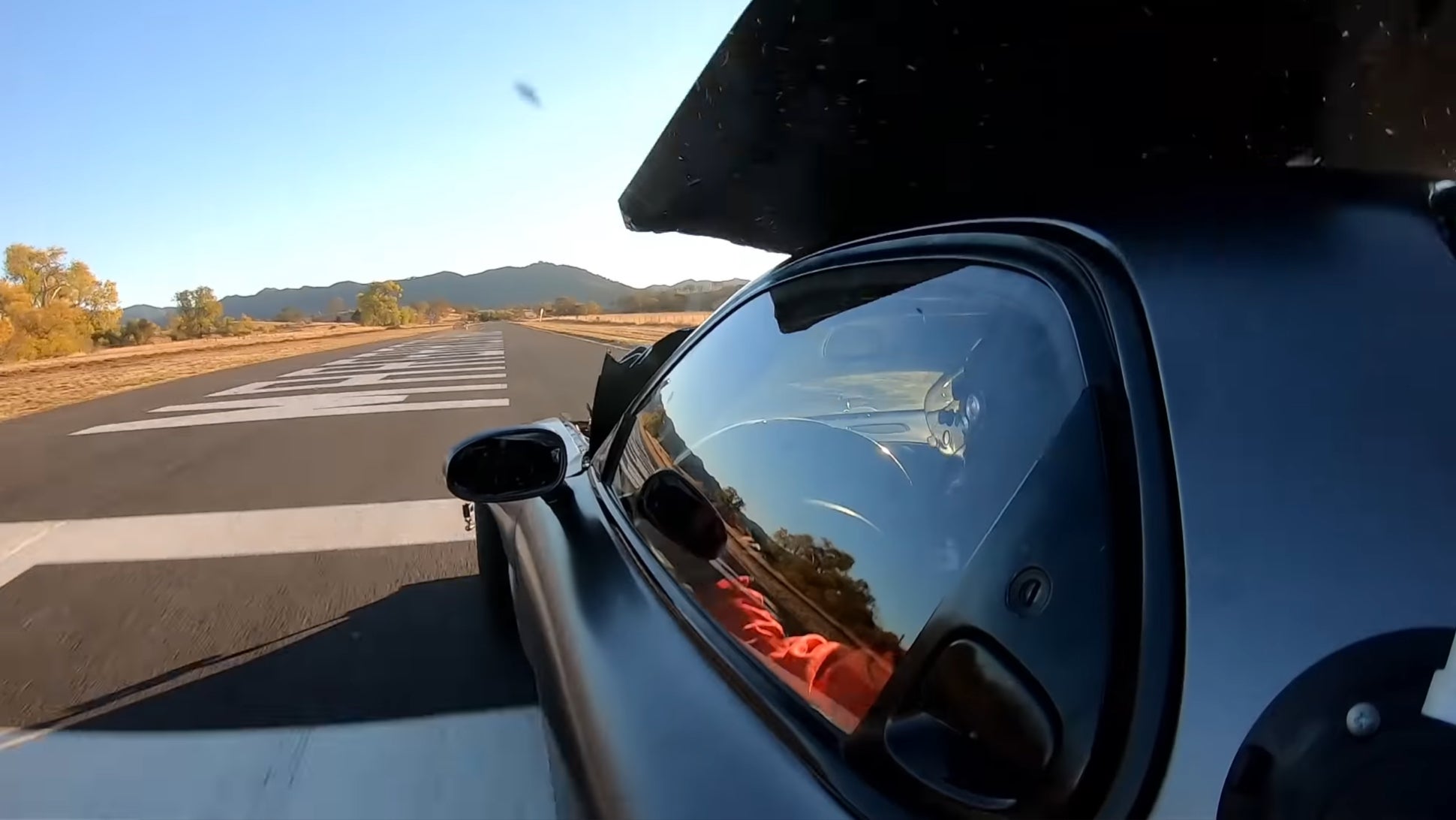 With the remnants of the hood removed, Dahm loses to the Hoonicorn again for Round 2, but is still pretty stoked about his build. This time, the RX-7 only has a fender pop loose.

The winner of this battle is whoever wins two out of three races, so Block has locked down his “I Beat Rob Dahm’s Quad-Rotor” title here, but they go again for our amusement. Once the problem flap on the RX-7’s fender is sawzalled off, Dahm’s ready to race again. 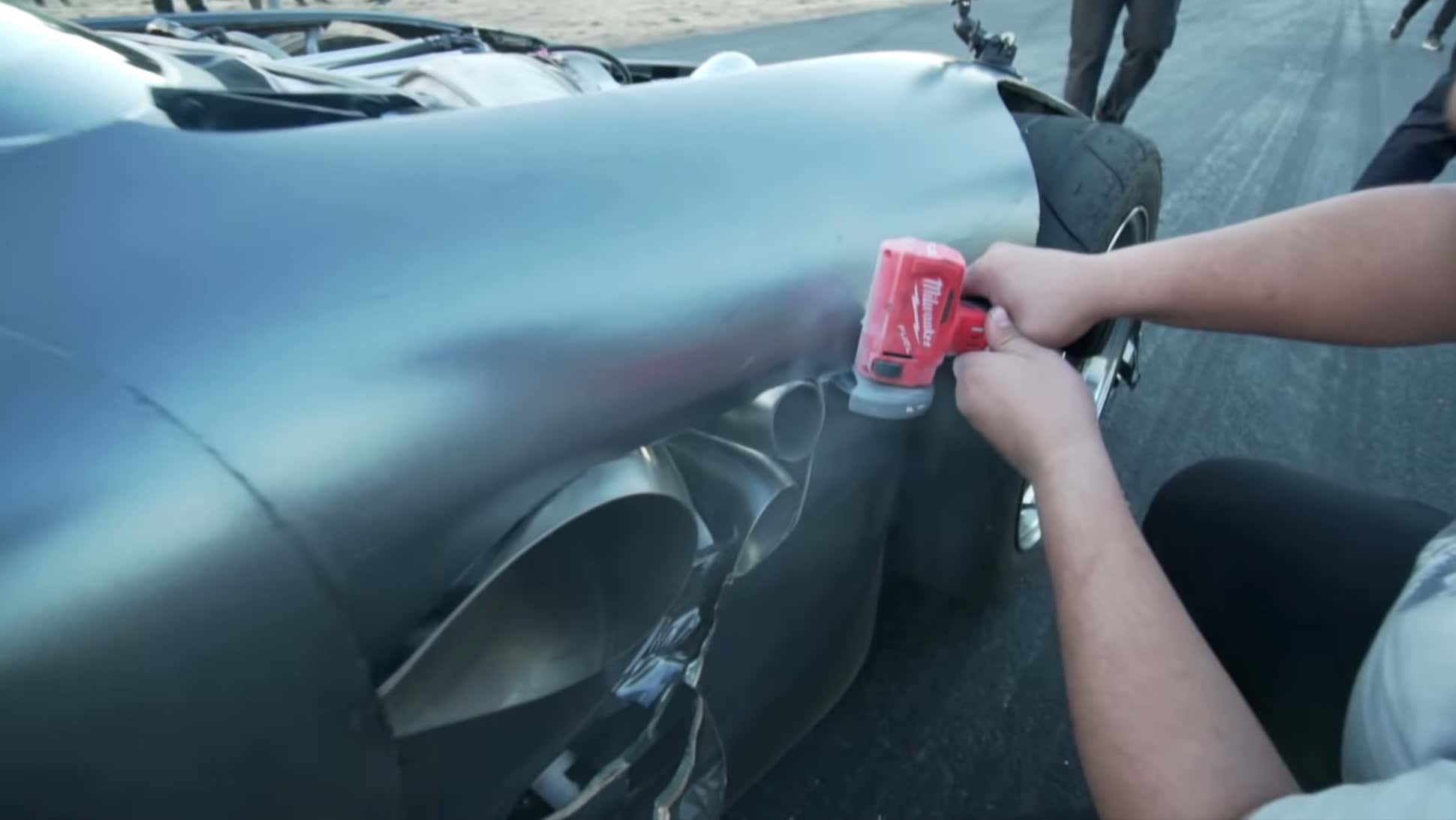 For the third run, the two finally go to a standing start, with Dahm getting the “hit”—as in, they go without a flagger or a light, but rather, start when Dahm starts moving off the line. Finally, the RX-7 gets its moment of glory after adding its own lightness, beating the Hoonicorn. Who’s inspiring who now?

Lest we think this was easy on the Hoonicorn, Block’s car starts spitting even more flames than usual on the bonus run (which it wins), signifying that his engine is probably toast. That’s racing!

END_OF_DOCUMENT_TOKEN_TO_BE_REPLACED

END_OF_DOCUMENT_TOKEN_TO_BE_REPLACED
We and our partners use cookies on this site to improve our service, perform analytics, personalize advertising, measure advertising performance, and remember website preferences.Ok