We Hitch a Virtual Ride in the Mercedes EQS 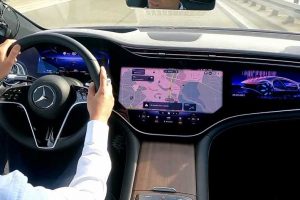 As of this writing, nobody outside of Mercedes-Benz employ has driven or even sat in a new EQS. It is a peculiarity of the particularly peculiar times we live in that a car so important to the future of Mercedes has been unduly shrouded from the world. For many of us, it has been a year plus of virtual happy hours, e-meetings, and Zoom birthdays. For Mercedes-Benz last week, the media first-drive of the electric equivalent of the company’s flagship S-Class was a ride-along over the internet. Interestingly this has turned the world of car reviews a bit inside out, as I’ve been able to “experience”—or at least e-experience—the inside of the car before the outside. 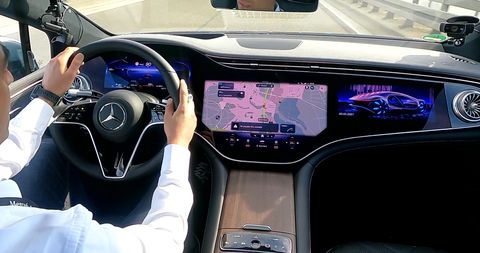 Mercedes-Benz clearly went to great lengths to allow people like me an opportunity to experience the new flagship electric EQS sedan before it becomes available to the general public. The whole existence of my career is predicated on the principle that automakers want me to get behind the wheel of their newest and best so that I can in turn be a surrogate for consumers like you. It’s my job to tell you whether a new vehicle is good or not, good enough to spend your hard-earned.

Coronavirus has made things tricky, particularly for international automakers like Mercedes-Benz. With travel restrictions, manufacturing delays, shipping delays, pushed back launches, and a weird patchwork of state-by-state mandates governing whether and where people can meet up, it’s been really tough to roll out a new model these days. There have been a number of different attempts to break through this current weirdness by many OEMs. Some have simply delivered pre-production cars with a brief discussion of how they work. Some have continued running full-fledged press programs in states where such meet ups are allowed. For the EQS, Mercedes eschewed all of that in favor of a strange Zoom meetup.

Over the course of 25 minutes, I was given free reign to roam about the cabin of the new EQS pre-production sedan. And by that I mean there were three live-streaming cameras broadcasting from inside the car as the Mercedes engineer in charge of range and energy efficiency for the EQ line drove around the Straße und Autobahn of Stuttgart, half a world away. I was interacting with the stream from my laptop tethered to my iPhone in the parking lot of a gas station in rural Nevada on my way to the non-virtual press launch of a new motorcycle. Heady times we’re living in, I suppose. 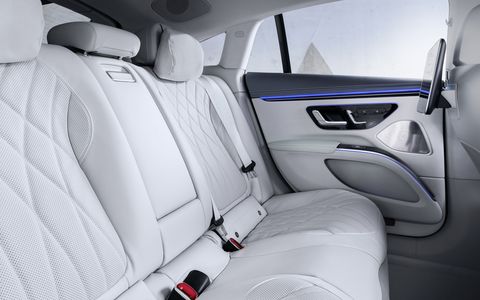 I’m not sure the sounds of the interior of the car can be trusted to the microphones placed in the car playing back through my laptop speakers, but it seemed a pleasant enough experience, and the driver didn’t need to raise his voice to talk to me. Mercedes’ new Hyperscreen display stretched across the dashboard looked a little purple tinted, but maybe it was the angle the camera was viewing it from. The passenger display stayed static with a high-quality display of last year’s Vision AVTR concept, but presumably when someone sits in that seat there will be things for them to touch and see.

An interesting piece of the Hyperscreen experience is Mercedes’ integration of artificial intelligence. You know how when you plug in headphones to your iPhone, it can prompt you with a “these apps are usually used with headphones”? The EQS Hyperscreen system can learn things you normally do while driving and bring them up before you ask for it. The example given by the Mercedes engineer was that if you call your spouse on the way home from work every day, it can pull up the phone and ask if you want to make that call at a certain time.

If you’ve had a particularly difficult day at the office and you need to wind down on your drive home, there is a mode called Energizing Comfort which provides ambient lighting, seat massage, calming peripheral visuals on the center screen, automated air motion inside the cabin, and a scent is deployed inside to keep you alert but relaxed. This is the kind of innovation we love to see from Mercedes’ flagship sedans. And if you’re going to take full advantage of the 478 mile range available in the EQS, it’ll be handy to have something keep you alert without resorting to Red Bulls.

How much information can be gleaned from a video conference inside the car? While there were some conversation difficulties for me talking to the driver, with typical internet conferencing robo-voice, I was able to hear him quite clearly, which I suppose is the most important part. There were a handful of points on the video conference where the Mercedes team thought I’d been disconnected, but I could still hear them talking about the fact that I was no longer connected. Visibility out of the car seemed pleasant, but my camera’s point of view was in the back seat above the driver’s right shoulder looking downward, so I couldn’t see very far ahead on the drive myself. That was a slightly disorienting view from which to experience a car, I can tell you that. 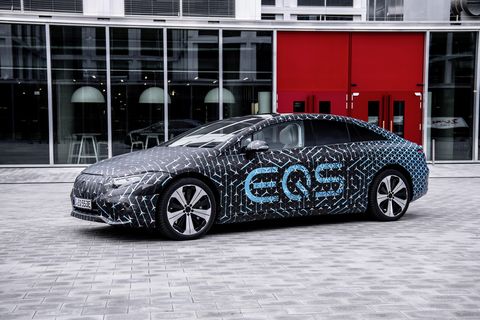 A company—and one extremely proud of its work at that—appointed a surrogate to explain to me how the car drives and operates. As the person who is ostensibly intended to be the stand-in for you, dear readers, I couldn’t help but feel that my reason for existing in this business-to-consumer relationship has been mooted, at least temporarily. I exist as something of a middle man. If my usually quite direct experience has been replaced by an indirect second-hand conversation with a company employee, what use is my subjective opinion if it is based on a story told by a biased source?

It should be known that I believe in Mercedes, and I’m confident that the new EQS will be a genre-defining car in the electric space for years to come. From what I’ve seen of the design, the user interface, and the spec sheet, I’m cautiously optimistic that it’ll be a seismic shift in EV tech. But it should also be known that I’ll have no idea how it drives for at least several months until Merc can get a few of these cars into the U.S. and get some impartial observers, not company folks, behind the wheel in the real world.

COVID has taken many things from us, lives and livelihoods chief among them. I wouldn’t dare compare this minor strife of temporary inconvenience to anything the world at large has experienced, but it does strike me as an oddity of this line of work we in this largely entertainment-based industry do every day. A complaint in the face of this that I don’t get to drive a Mercedes-Benz for another few months is hardly one worth addressing. The point here isn’t to elicit your empathy, I have no need for that. The point of all of this is to say that there is no replacement for direct experience, and it certainly can’t be replaced by corporate-approved speech parroted by Mercedes employees.

I don’t blame Mercedes for trying something new, and it just goes to show how important the EQS is seen as being by the automaker. It was an interesting experience that I’m happy to have given a shot, but I learned far less than I had hoped I would. We have all been e-conferencing and e-meeting for over a year, but I don’t think the technology is quite ready for e-driving. I can say that my coronavirus inoculations can’t come soon enough, as I’m raring and ready to go to get back out there behind the wheel again, if only to provide as unbiased an opinion as possible.

What are you looking forward most to learning about the Mercedes-Benz EQS when we finally get to see, touch, and drive one in real life? Let us know in the comments below.