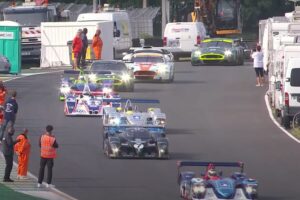 As we opined last year, the internally combusted soundtrack at the 24 Hours of Le Mans is getting far less interesting each year. The prototypes haven’t made sweet sounds for years, and it’s now slim pickings in the GT field too. By 2020, the last of the thundering old naturally-aspirated V8 Vantage GTE cars had gone, as had the legendary Chevrolet Corvette C7.R with its filthy exhaust note.

At the 2021 running of the event last weekend, the latter’s C8.R replacement was in play with a far more polite-sounding flat-plane V8. The 4.2-litre Porsche 911 RSR is probably the last great-sounding car across the whole grid, but even that’s been toned down a little compared to its screaming 4.0-litre predecessor.

See also: The Other Thing Missing From Le Mans This Year – V8 Filth

Happily, there are aural delights away from the main event. The LMP3 cars of the Road to Le Mans support race sound fantastically rude since they’re powered by – of all things – the Nissan VK V8. Even better than that, though, is the Endurance Racing Legends series.

We’ve looked at this series before via some footage of an Aston Martin DBR9 shouting its way around various European circuits, which gave us some solace in light of the plug being pulled on the Valkyrie Le Mans Hypercar project. This video only really scratched the surface, though.

Makings its debut in 2019, Endurance Racing Legends focuses on sports cars from the 1990s and 2000s. At the 24 Hours of Le Mans this year, there were two 45-minute races, and the grid was nothing short of exceptional. Lining up to do battle at Circuit de La Sarthe were GT1 heroes like the Prodrive-built Ferrari 550 Maranello, several DBR9s and the Porsche 911 GT1, a whole bunch of 996 911 GT3s, and prototypes including the Bentley Speed 8 and the Judd V10-powered Dallara SP1.

The Bentley Speed 8 of Shaun Lynn and the Dallara SP1 of James Cottingham proved to be the fastest of the bunch at Le Sarthe this year. Lynn took the checkered flag in the Bentley ahead of Cottingham in race one, with the pair switching places for race two.

The real winners here, though? That’d be anyone in the reduced capacity crowd who turned out to watch. The noise is amazing enough on video, so it must be truly spectacular to hear IRL.