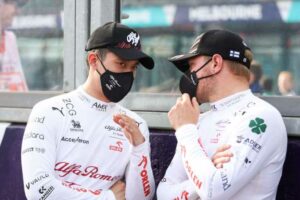 Despite Alfa Romeo’s points-scoring finish at the Australian GP, Fred Vasseur is still smarting after they “f***ed up” qualifying.

Valtteri Bottas took to the Albert Park circuit for Saturday’s qualifying with a 103-race streak of Q3 appearances going back to his first very season with Mercedes.

It ended in Melbourne.

The Finnish driver finished qualifying 12th fastest, missing out on a Q3 berth by almost three-tenths of a second, while his team-mate Zhou Guanyu was only P14.

It was a case of what could have been as Bottas was sixth fastest in Q1 with the driver later saying the team “lacked a bit of one-lap pace” having taken the “decision to prioritise” their set-up for the race.

Vasseur is still smarting over that double Q2 exit.

Valtteri Bottas' run of consecutive Q3 appearances started in Australia, and that's where it also ended today sadly 💔 He holds the F1 record though, with 103 in a row 👏#F1 #AusGP #Autosport pic.twitter.com/92NncNrUrr

That decision to prioritise race set-up ultimately paid off on the Sunday with Bottas, despite having to contend with an over-aggressive Lance Stroll, raced his way to eighth place.

“The race pace was mega,” Vasseur said. “The issue is that we lost too much time on track behind Stroll mainly.

“But overall, I’m very happy with the pace.”

And while Zhou wasn’t able to score, finishing P14 on the day, his boss was still satisfied with his performance.

“I’m very happy with the pace of Zhou also because he did very well,” he said.

“I think for us it’s a good weekend, on the same line of the first two.

“We just have to be a bit more efficient in Q2 probably, and we’ll start in a better position and it will change our weekend.

“Overall, I think we did a good weekend.”

Up to P6 in the Constructors’ Championship with 13 points, one more than fellow Ferrari-powered team Haas, Vasseur is hoping for even better in the next two races.

“I’m a bit more confident for the next two or three because we have also good updates in the pipeline,” he said. “It looks good.”