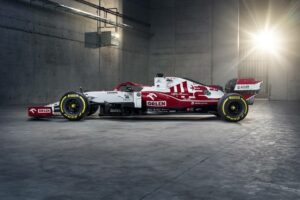 Alfa Romeo will celebrate their 111th birthday by sporting a “special tribute” on the livery of the C41s at the Styrian Grand Prix.

In the world of motor racing, Alfa Romeo is a brand steeped in history, one which returned to Formula 1 in 2018 as the sponsor for Sauber, before taking over the name of the team for 2019 as they became Alfa Romeo Racing.

June 24, 2021 marks Alfa Romeo’s 111th birthday, and so the team have revealed that their logo, most clearly visible on the engine bay, will be transformed into a ‘111’ shape to mark the occasion.

“The cross is warped in a sequence of number one figures, developing in a perspective as to represent the passing of time and giving a dynamic twist to the number 111,” the team stated.

There will also be a special mark on the front nosecone, which Formula 1 state is “reminiscent of the ‘trilobe’, a shape that can be found on the grilles of their range of road cars”.

Alfa Romeo has collected only two points so far across the 2021 season, with Kimi Raikkonen and Antonio Giovinazzi scoring one each, but the belief that the team can consistently fight for points is back.

The team did though struggle last time out at Paul Ricard, with both drivers finishing outside the points, but Giovinazzi hopes that the Red Bull Ring will prove a better fit for the C41.

“It was not many days, only three, but we understand that for sure the conditions on Sunday [at Paul Ricard] were completely different from what we had on Friday,” he explained to reporters ahead of the Styrian Grand Prix.

“The rain the morning, plus the gusts in the race was not easy especially for our car maybe, but we will see now here, we have different conditions, we don’t know if it will rain or will stay dry.

“Hopefully this track can be better for us.”