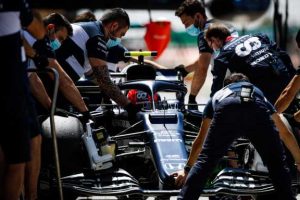 AlphaTauri technical director Jody Egginton believes that the team will have made a “good step forward” by the Spanish Grand Prix.

Red Bull’s sister team made an encouraging start to the season, with Pierre Gasly taking P5 in qualifying in Bahrain and, while he dropped out of the points in the race after losing his front wing, Yuki Tsunoda finished in P9 and looked quick.

The opening weekend, as well as pre-season testing, has led many to believe the team will be in the fight for P3 in the Constructors’ Championship this year, and Egginton thinks that things will only get better going forward as they gather data from a new wind tunnel.

“Our programme [in pre-season testing] was just to get to know our car in a really systematic way; we spent a lot of time gathering aero data, because this car was developed in our 50% wind tunnel, and we’ve since moved to the 60% wind tunnel,” he said as per the French branch of Motorsport.com.

“So there’s a lot of correlation to be done. So we’re gathering a lot of aero data, because we’re now developing the car in a different wind tunnel. It was born in one place and is now developed in another. So there is a lot of aero work, we are just trying to understand the correlation as well as the differences related to the change in regulations.

“We already have developments in the pipeline; we were deciding whether the aero data from testing confirmed that these developments were the right way to go, while increasing our knowledge of the car’s behaviour.

“Then we brought a car here [to the Bahrain GP] with some differences, very small developments, and just continuity. Fortunately, we left testing with what looked like a relatively good car.”

Specifically, he’s expecting significant progress to have been made by round four.

“We are trying to work on giving the car a wider aerodynamic operating window,” he added.

“Especially at low speeds: the driver can exploit it, and we will go faster. But there’s still that correlation work in the background, before you suddenly say, ‘OK, we’ll do this, we’ll do that’.

“So it’s aero development, it’s exploiting more of the performance of the areas of the car that have been affected by the rule changes, it’s making sure that those changes, as we develop, don’t upset anything else. It’s a steady development.

“We’ll have new parts at Imola, Portugal and Spain, you know, it’s gradual. Nothing that will make headlines. But by Spain, we should have a good step forward.”