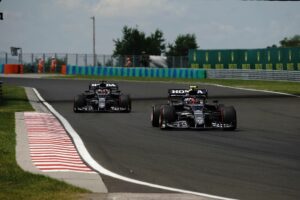 Franz Tost does not mind which driver brings home the points if it leads to AlphaTauri finishing fifth in the Constructors’ World Championship.

Seventh last year and sixth the season before, P5 would be an excellent achievement for a team that lives mostly in the shadow of the same owner’s Red Bull squad.

But on the evidence of the campaign so far it would certainly not be an undeserved placing, especially on the impressive qualifying pace shown by Pierre Gasly in particular.

At present, AlphaTauri are sixth, nine points behind Alpine who had an outstanding Hungarian Grand Prix with Esteban Ocon and Fernando Alonso bagging first and fourth respectively.

But they have 20 in hand of Aston Martin who, when known as Racing Point, were right in the mix for P3 last year until the last race when ultimately pipped by McLaren.

Although Gasly is the undoubted AlphaTauri team leader and has collected 50 of their 68 points, rookie Yuki Tsunoda has started to finish in the top 10 a bit more regularly of late.

Tost, the team principal, is not setting any specific targets for either driver, merely hoping one or both of them will keep the tally ticking over nicely in the second half of the season.

“As long as we are in front of Aston Martin and Alpine, it’s okay. I don’t care which driver is delivering out of the cars,” said Tost, quoted by Motorsport.com.

“Pierre is doing a fantastic job. He is driving really on a very, very high level and he shows the potential of the car.

“I must say the potential is there to finish fifth in the Constructors’ Championship. But of course, we have to get it together.”

Although Tsunoda has been involved in more than his fair share of crashes during his debut campaign, Tost believes the signs of inexperience he has displayed were inevitable.

“Yuki is a rookie and Formula 1 nowadays is really very, very professional,” said Tost. “It’s on a very, very high level, also on the technical side.

“For young drivers, it’s a big challenge to be in Formula 1 and to become a successful racer in there.

“I think from the outside we underestimate this, and we have to give young drivers the time because just to come from another category and sit in the car, thinking you can drive without doing any mistakes and you will be immediately successful, is dreaming on the wrong side.

“To become successful in Formula 1, you have to work very, very hard and you have to be disciplined. But also this, the young drivers have to learn.

“We are on a good way with Yuki. He is learning fast, and sometimes maybe he is a little bit too motivated.”