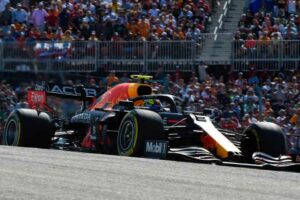 Alpine F1 Racing boss Laurent Rossi is the first to admit he didn’t watch the early episodes of the Formula 1-themed Netflix series Drive to Survive.

“My friends were telling me that I should watch it,” Rossi said in a Zoom interview from Austin, Texas, two days before this year’s F1 US Grand Prix. “I said, ‘no, sorry, I watch the races and that’s enough.’ But then I watched it, and then said, ‘Nicely done, guys. This is entertaining!'”

Rossi is certainly glad that US fans have embraced the show more than he did early on. According to the Rossi, Drive to Survive is just part of a turn of events that has helped Formula 1 grow its footprint in the United States.

Not everyone is on board with at least one contributing factor to the growth. F1 championship points leader Max Verstappen has shunned the cameras and the producers of the Netflix series, saying that he’s not a fan of what he calls “fake” content or made-up rivalries. At least Verstappen is doing his part, on track anyway, to pump up the volume of Formula 1 in the United States. His win on Sunday at the US Grand Prix in Austin came before an announced record weekend crowd of 400,000 fans.

“We had a perfect storm, if you will, or alignment of stars,” said Rossi. “In fact, COVID even helped us. Because while there was COVID, few sports ran with fans in the stadiums or in the premises, and (F1) could. You could still watch Formula 1 from your couch. It’s almost as good as watching it from the stadium. That helped us carry on while many other sports had stopped.

“At the same time, there was the Netflix show, and there were other (shows) on drivers here and there. What people discovered is the the sport has changed. You have to have something real behind it. The sport has changed. It’s catering to the real of society at large—greener, more sustainable, more inclusive, diverse, that helps. “

Mercedes team principal Toto Wolff said that he, too, was wrong, at least early on, about Drive to Survive and the impact it would have on new fans, especially in the States.

“We were not keen at the beginning of Netflix because we wanted to concentrate on on-track performance, and I was wrong,” Wolff said in Austin. “It’s clearly a big success. Everywhere in the world it was the number one documentary on Netflix for quite a while, and it’s become part of Formula 1 and you can clearly see it’s beneficial. Yes, we’re a sport and we need to stay true to the values of the sport and have no gimmicks—but sport is entertainment and I think these guys have brought us a new angle, a new dimension, and the feedback that we get from fans is tremendous—especially here in the US.”

McLaren Racing chief executive Zak Brown, an American who made his name in the marketing game, agrees.

“I think Netflix has been outstanding for Formula 1,” Brown said. “It’s driven a younger fan base, it’s driven a much larger fan base. It’s really had an impact in America. From what I can see—I can only judge the sport from what I know—so I can’t really speak to what happens in other teams. I think it’s factual with a little bit of theater added, and that’s what television is. I think it’s doing what we as a sport would like it to do, which is turn on a bunch of new fans. I think it’s been hugely successful.

Rossi also gives American stakeholder Liberty Media major props for the sport’s growth in new markets. He thinks Liberty’s move to budget caps will help to eventually level the playing field, though he admits the big teams in the sport are still far ahead of the midfield teams. Rossi also said the new formulas for allocating prize money to the teams (one of the best-kept secrets in the sport) has taken a lot of the financial pressures off the smaller teams as money funnels a little more equitably down throughout the 10 teams than in years past.

“It’s not just the spirit of racing, (Liberty) understood the need to monetize the sport better, capping of costs.” Rossi said. “All of this is the perfect alignment. We have the same goal in the US that we have in the rest of the Europe for the moment, which is to get a bit of awareness—more than a bit actually—to get awareness, simply have the brand known.”

The incredible crowds in Austin did not go unnoticed to even those focusing on their own teams and their own responsibilities at the US Grand Prix. Austin’s F1 presentation was a show that Rossi says could be repeated at other venues in the United States. Next year, Miami joins the F1 party. And, a group is in the early stages of working to get even a third race to Las Vegas.

“All of us want to indeed make the sport even more entertaining,” Rossi said. “We have like actors in a show that are putting their best foot forward to entertain more viewers. It’s the perfect recipe for a great show, for great entertainment. I think it would make sense to have more races.”

A group of execs from Las @Vegas will travel to @COTA this weekend to explore bringing an @F1 race back to Sin City as soon as 2023, per @Sports8. pic.twitter.com/3PVOVvroDd

Which brings Rossi back to Netflix.

“They’re bringing more audience to Formula 1 and therefore more sponsors, more money,” Rossi said. “They did that because they did something very well, which is to show the human side of the sport—the drivers in the midfield, the managers, the stress. This is cool. This is real life. People can identify. They know that it’s not glitz and champagne all the time.

“To say you don’t like it and don’t want to be part of it, you can’t have it all. What I will recall to Max, I have to say, is that there is a fine line where you should not dramatize too much and twist facts. I know that could happen here and there—like the rivalries that might have been created for the sake of the show, that in real life are not there yet or not even real. So I guess that’s also the onus is going to be on Netflix to make sure that they don’t break the toy.”

Rossi, who was slow to come around to the show, which is now in Season 3, now can’t wait to see an upcoming episode that is sure to feature his team and Alpine driver Esteban Ocon’s win at Hungary earlier this season.

“So yeah, I am excited. The victory and all those things,” Rossi said. “I don’t know what’s going to be said. Are they going to spin that thing? But I’ll watch it as a spectator.

“Hopefully, I’m not going to wince too much.”

Have you caught Netflix’s Drive to Survive? If so, share your thoughts on the show, if it is an accurate portrayal of F1, the races, and the drivers in the comments below.