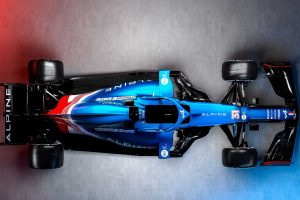 The Alpine F1 Team has its insurance policy in the event that Fernando Alonso is unable to go 100% at the Formula 1 season-opening weekend at Bahrain later this month.

The team this week announced that it was adding Formula 1 veteran Daniil Kvyat, 26, as a reserve driver for the 2021 season. Kvyat has started 110 F1 races. He was released following the 2020 season after six years with Red Bull and Toro Rosso/AlphaTauri.

Kvyat managed three podiums, with the most recent coming at Hockenheim with a third-place finish for Toro Rosso.

The team previously announced that Guanyu Zhou was returning as the team’s test driver. Esteban Ocon and Alonso are lined up to be the team’s regular F1 drivers in 2021. Alonso, however, is believed to be still recovering from what was reported to be a serious cycling accident that occurred last month in Switzerland.

Reports from Europe following the accident were that Alsonso suffered a broken jaw and damage to some teeth. However, in a video posted to Alpine F1 team social channels on March 2 showed a remarkably fit-looking Alonso who did not appear to have any facial injuries or damaged teeth.

And while our friend @alo_oficial can’t physically be with us, rest assured he is paying close attention!

Alpine CEO Laurent Rossi made no mention of Alonso in the Kvyat announcement.

“Throughout his career, Daniil has forged a reputation as a very quick driver, but has also shown great resilience,” Rossi said. “We are pleased to have yet another determined and talented driver in our ranks as we make our first F1 campaign as Alpine F1 Team.”

As for Kvyat, he sounds ready to go if needed. Formula 1’s season-opening race is set for March 28 in Bahrain.

“I am very excited to join the Alpine F1 Team family,” Kvyat said. “The team has achieved some great results in the past year and is very technologically advanced. Development has been strong, and I am aiming to contribute to this positive trend. I will try to bring my experience on and off track to help develop the A521 and future cars as well. As a Reserve Driver you need to keep sharp and I look forward to integrating into the team in several different areas.”