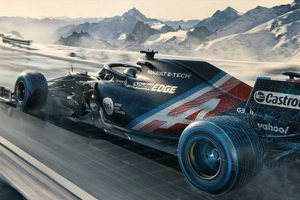 Alpine have given us another sighting of their winter livery as Christian Lundgaard completed a test around Circuit Paul Ricard.

For 2021, the Renault name gave way to Alpine, as Groupe Renault bring their performance division into the world of Formula 1.

Esteban Ocon will remain with the team, boosted by his 2020 campaign alongside Daniel Ricciardo which certainly improved into the latter stages, but now he has another huge challenge on the other side of the garage – that being Fernando Alonso.

The Spaniard makes his return to Formula 1 with the team which took him to his two World Championships under the Renault name in 2005 and 2006.

But while all those pieces of the puzzle prepare to fall into place, Alpine junior Lundgaard got the chance to take the Renault R.S.18 for a spin around Paul Ricard, home of the French Grand Prix.

However, the R.S.18 was kitted out in Alpine’s rather dashing winter livery.

Lundgaard was retained under the rebranded Alpine Academy for 2021, and with their backing he will get another shot at Formula 2, remaining with ART Grand Prix for the 2021 campaign.

And with no “rich father” to back him, Lundgaard is desperate for a strong campaign.

“I am excited to be driving in the same class for the first time two years in a row,” he told Danish outlet B.T Sport. “Now I have learned how important it is to be stable.

“2020 was a roller-coaster ride with many ups and downs. This year, we must optimise everything and take points home, even on the weekends when we are not competitive.

“For me, 2021 is definitely a crucial season in relation to a future in Formula 1.

“It is my second year in Formula 2 and if you are to have a third chance, you must have a rich father. And I do not have that.”

Lundgaard and Guanyu Zhou, alongside Oscar Piastri, will be the Alpine prospects representing the brand at the highest level of junior racing in 2021 in Formula 2.

And the expectation placed upon both of them is to challenge for the title, a target they both failed to reach in 2020 when it was Mick Schumacher who emerged triumphant.