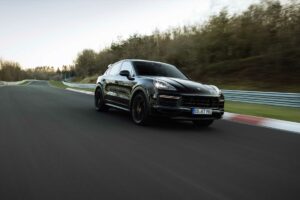 If you’ve been thinking of getting a new Porsche Cayenne might we suggest you hold off for a bit. There’s a new variant coming, so new we don’t know the exact specs and it doesn’t have a name yet. But we do know it recently broke the Nürburgring lap record, has more than 600 hp, and can hit 60 mph in a time rivaling the 992 GT3 with a PDK, also known as 3.2 seconds. For reference, the most-powerful Cayenne you can get at the moment is the 670 hp Turbo SE-Hybrid that hits 60 mph in 3.6 seconds according to Porsche.

Indeed, as Porsche says, “the new performance model of the Cayenne series has convincingly proven its dynamic potential ahead of its launch.” Test driver Lars Kern drove a lightly camouflaged series production car to a 7:38.925 time over a lap of the legendary Nürburgring Nordschleife, all 12.94 miles. Porsche says in Nürburgring GmbH’s official rankings, a notary public certified the record time for the “SUV, off-road vehicle, van, pick-up” category.

“Over the first few meters of the Nordschleife in this Cayenne, you’re tempted to turn around to make sure that you’re really sitting in a spacious SUV,” Kern said, who was part of the development team. “Its high steering precision and stoically stable rear axle gave me a lot of confidence in the Hatzenbach section. It changed direction at lightning speed in the fast curves such as between Hohe Acht and Eiskurve, with no wobble and no tendency to understeer. Even in this technical stretch, the Cayenne is a real driver’s car that is easy to control.

“The wheels normally leave the ground at both the Pflanzgarten I and II crests but these sections felt smooth and quiet in this Cayenne. There is a lot of wheel travel, and the body stays solid and controlled. The drivetrain makes a really strong impression. It delivers power in every situation as well as perfect gear changes.” 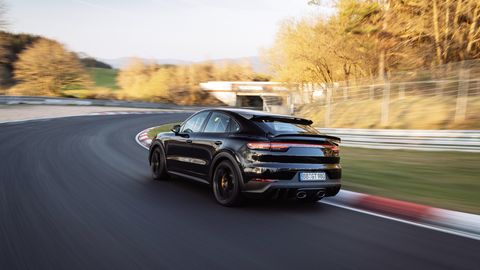 “Our record-breaking Cayenne is based on the Cayenne Turbo Coupé,” he said, “though more systematically designed for maximum longitudinal and lateral dynamics. Its record time on the Nordschleife confirms the dynamic capabilities of our new performance SUV. Furthermore, it’s a typical Cayenne all-rounder, providing a high degree of driving comfort and everyday utility.”

The record setter was stock though it did have a racing seat and roll cage. The notary public also confirmed SUV’s series production status. The tires used for the record lap were 22-inch Pirelli P Zero Corsas specially developed for the new Cayenne model and will be standard equipment.

What do you think of all these Nürburgring records? Log into the comments and let us know.