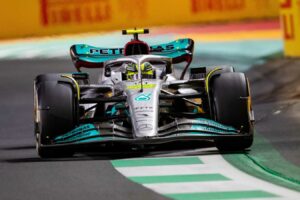 Mercedes trackside engineering director Andrew Shovlin says the team’s advantage over the midfield allows them the chance to experiment with their car, as they look to get themselves back to the front.

George Russell admitted he ran a lonely race in Jeddah, with a big gap in front and behind him for much of the grand prix as he came home P5 in the end on Sunday.

Lewis Hamilton had been running in behind his Mercedes team-mate, clawing his way back up the field after being knocked out in Q1, but unfortunate timing with the deployment of the Virtual Safety Car saw him plummet to the outer reaches of the points come the chequered flag.

But with the performance in Bahrain coupled with Saudi Arabia underlining the performance advantage they seem to hold over the midfield, the team say they now have opportunities to play with their car more to get it right.

Valtteri Bottas admits it is "weird" to see Mercedes struggling.

"It’s also nice to be able to battle with them," said the Alfa Romeo driver.

“I think this was kind of the best-case-scenario for our first season together I could ever imagine, with the information I had.” #F1 pic.twitter.com/Ly6rYMK4gq

“Well, we’re under no illusions what that performance gap is and in Jeddah, it was ultimately a bit bigger than in Bahrain,” Shovlin said in the team’s post-race debrief.

“But we’ve got quite a lot to find both in qualifying and on long run if we want to challenge the Ferrari and the Red Bull cars.

“So, ultimately though, this is a problem that is going to be fixed back at the factories both in Brackley and Brixworth.

“Everyone is working very hard to try and understand the issue and bring solutions and we are going to be doing that in a phased way over the next few races.

“At the track we are going to be doing as much as we can to minimise damage, to score as many points as possible.

“So, really there is two elements to this: maximising the performance in a given weekend but then the bigger part of this is trying to get back to a level where we can compete for pole positions and for race wins.”

As part of their plans, a report has claimed Mercedes are due to be bringing a new rear wing construction to Australia. Team boss Toto Wolff admitted the team were ‘over-winged’ in Bahrain, causing too much drag on the straights.

They did trial a slightly slimmer rear wing in Jeddah, but a wider overhaul may be on its way to Melbourne.