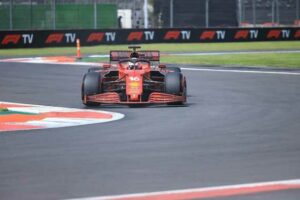 Charles Leclerc is “mad” at himself and has apologised to his team after only qualifying in P8 for the Mexican Grand Prix.

Ferrari headed into the race weekend in Mexico City widely expected to be the fastest team behind the two front-runners, and Carlos Sainz’s results in FP2 and FP3 suggested that was the case, with him finishing both in P5 behind only the Red Bull and Mercedes cars.

Leclerc, who crashed in FP1, had struggled to match the pace of his team-mate though and that remained true in qualifying, with Sainz securing P6 behind Pierre Gasly but the Monegasque only able to take P8, being beaten by Daniel Ricciardo.

He says he felt more comfortable with the car in that session but, while he encountered some traffic, has taken full responsibility for not delivering a better lap when it mattered.

“For sure in the last sector having a car ahead didn’t help me, but I have to say it’s just my fault, I can only get mad at myself, I was not good enough,” he told Sky Italia.

“In the first sector I was doing the lap I wanted, everything was going well, I was one-tenth and a half faster than the lap I did before, so we were there. Then I made some mistakes that I should not have done in Q3.

“I’m sorry for the team because we did a great job from FP1. I was not at ease with the car at all, I made many mistakes in FP1, FP2 and FP3. In qualifying, I finally found the feeling, I was very competitive until this mistake.

#Quali is over in Mexico City 🇲🇽📍@Carlossainz55 [email protected]_Leclerc P8

Sainz has undoubtedly looked the more comfortable of the two throughout the weekend, but while he out-qualified his team-mate, he wasn’t fully happy with his Saturday result either.

After his practice performances, he expected to secure a top-five spot and was left frustrated after being pipped to it by Gasly in what he described as the hardest qualifying of his life, one in which he lost power in the early stages.

“For the feeling I had, for the situation I had in Q1 and Q2 and all that, I have to say P6 is a good starting position,” he said.

“But it’s true that as a driver, after I was going fast in FP3 and FP2, I expected a bit more.

“It’s probably been the most difficult qualifying of my life, because a lot has happened.”