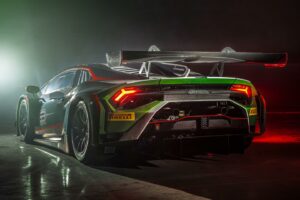 STO not quite racy enough for you? Here's the FIA-approved version…

You’ll be familiar with the Super Trofeo Omologata. Lamborghini’s steroidal Huracan was launched last year as the closest possible thing you could buy to an actual Super Trofeo racing car. We rather liked it. So it stands to reason that we’ll probably quite like the new Huracan GT3 EVO2, because the manufacturer has worked backwards from its homologated road car to create its latest FIA-compliant track car.

This marks the third generation of racing Huracan, and it’s probably worth noting just how successful it’s been. Not only has Lamborghini delivered more than 500 cars since its introduction, it has also secured more than 40 international titles in six seasons. The GT3 version is big business – and with Bentley, Porsche, BMW, Mercedes-AMG, Audi and (with the incoming 296 GT3) Ferrari to compete against in glitzy competition, it is likely to stay that way.

Using the STO as its inspiration does the latest car no harm at all. It is chiefly in the aerodynamic department that it is distinguishable from its predecessors; most notably thanks to the ‘unmistakable’ hexagonal airscoop and rear fin which are carried over. The former is connected to a snorkel which replaces the side intakes and is credited with being a more efficient system of channeling airflow directly into the engine.

Elsewhere there are new splitters, diffuser and a revised underbody to provide greater downforce than you got in the outgoing GT3 EVO. The rear wing, mounted on aluminium alloy pillars is said to be ‘inspired’ but the STO, too, although the new supports are intended to offer race teams greater precision when it comes to the business of adjusting them for different tracks.

Inside you get a redesigned roll cage which features the introduction of two rear pillars, alongside carbon-Kevlar honeycomb side panels for superior safety. Lamborghini Squadra Corse has also opted to fix the plexiglas side windows to the doors with a ring of screws, a change which is said to result in greater structural rigidity. The braking system has been updated with new pads and callipers, too.

Obviously you still get a naturally aspirated V10 behind your head, now furnished with 10 electronically actuated throttle bodies. The unit is actually mildly detuned in terms of total output compared to the 640hp STO – but don’t expect to notice that if you ever encounter a GT3 in the flesh. Lamborghini says the EVO2 will be delivered to customers from the second half of this year, with its track debut slated for Daytona 24hrs next year. And if any current Huracan-owning gentleman racers feel left out, they can upgrade to EVO2 spec via an evolution kit. Or you could buy an STO here.