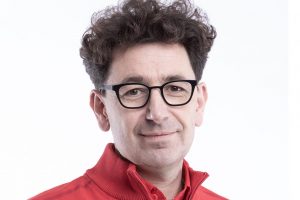 Mattia Binotto made erasing “setbacks and mistakes” the key theme of his message in part one of Ferrari’s launch for the 2021 season.

The Scuderia’s team principal was clearly unafraid to address the elephant in the room, namely the Italian giants’ dreadful 2020 campaign in which they finished sixth in the Constructors’ World Championship.

The first half of the Ferrari launch took the form of a recorded broadcast, bookended with statements from Binotto standing in the Victory Hall at the Maranello HQ, while the middle section comprised of interviews with drivers Charles Leclerc and newcomer Carlos Sainz – including quizzing each other.

Part two will take place when the SF21 car is unveiled in Bahrain on March 10, a day before its shakedown test and two days before the start of pre-season testing at the Sakhir venue.

Rather than set any ambitious targets for the new campaign, Binotto focused on how Ferrari need to improve and push themselves back towards the front of the grid.

“2021 is going to be a very important year full of challenges,” said Binotto. “First of all the car, the SF21, which has inherited much from its predecessor. And then the budget cap – for the first time we have a limit on spending. We must face these challenges with determination along with our new driver line-up.

“In addition, the 2022 car must be planned from scratch since it will be completely new in its design and its technical features.

“The path that lies before us is long and full of obstacles. It’s entirely possible there will be setbacks and mistakes. Some of them are inevitable, others are intolerable. The important thing for us is that any weak spot becomes an opportunity for our team to improve, with the right spirit.

“To reach our goals for 2021, we have a new driver team, Carlos and Charles, the youngest seen at Ferrari since 1968. We intend to construct our future around them. They too are well aware of being part of Ferrari’s long and extraordinary history.

“I realise that in every competition it’s possible to make mistakes. I expect less mistakes – very few or none. I expect to see quality and a healthy, joyful competitiveness.

“I would like to say one last thing to Charles and Carlos, to all the women and men who work at Ferrari and to all our fans.

“I’ve been a Ferrari fan since I was a child. I, along with Charles and Carlos, must make the supreme effort . We are part of a team that counts more than any of us singularly. We have inherited this enormous, exciting passion and we have recently had disappointments that must not be repeated.

“Our duty is clear – we must represent and honour the Ferrari flag because the Cavallino Rampante is a symbol of outstanding Italian excellence.”