Bottas: McLaren 'screwed' me for strategy 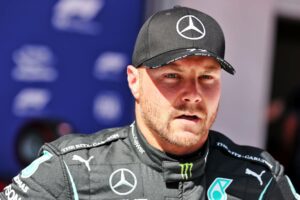 Valtteri Bottas has no doubt that McLaren’s complaints over his pit-lane spin in Austria were purely for strategical gain.

The Finn lost control of his W12 upon exiting his pit box during FP2, causing him to come to a stop in front of the McLaren pit wall.

“They could have taken out one of the guys on the pit wall.”

Following the incident Bottas said he was not expecting a penalty, but the stewards went on to impose a three-place grid drop, while two penalty points were also added to Bottas’ superlicence.

That means that Bottas will now start the Styrian Grand Prix from P5, having originally qualified P2, and in his mind this was all about strategy for McLaren.

“My personal view, it’s quite harsh. I never imagined there would be a penalty,” he told reporters.

“But, of course, other teams, when they see the opportunity, they complain it’s dangerous etcetera so that we would get penalised.

“That’s how it goes. Everyone is always trying to screw you over in this sport.”

Nonetheless, Bottas believes “anything is possible” in the race having gained a much “better feeling” for the W12 as he transitioned from practice to qualifying.

“It’s a new day tomorrow, long race ahead and anything is possible,” he told Sky F1.

“I think it was a strong qualifying. If I look at Practice Two and Practice Three I still struggled a bit, but with the set-up we’re on the right direction.

“It was a lot better feeling, really felt good in the car and felt like I got the most out of the car. Just the first run in Q3 I had traffic with [Yuki] Tsunoda, so I lost a couple of tenths there, so, I don’t know, maybe there was a bit more to come.”

Ahead of Bottas Max Verstappen will start the Styrian Grand Prix from pole, while Sergio Perez shares the second row with McLaren’s Lando Norris who inherited P3 thanks to Bottas’ penalty.

But asked if he could still take the fight to Red Bull in the race, Bottas replied: “Yes, definitely.”