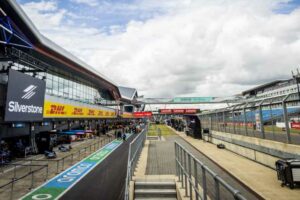 The British Grand Prix has been red-flagged on the opening lap, after a first corner collision involving several drivers.

The race at Silverstone has been red-flagged just seconds after it began, after a multi-car collision involving several cars. With the field negotiating their ways through the first corner, several cars made contact.

Mercedes’ George Russell was eliminated on the spot, while Alfa Romeo’s Zhou Guanyu was briefly shown on-screen with his car upside down sliding through the gravel. While no replays or footage from the accident have been shown on the world TV feed, Zhou has been confirmed as being out of the car, conscious, and has been taken on a stretcher to an ambulance for further checks.

Alfa Romeo have since confirmed that Zhou is conscious and is being evaluated at the Medical Centre.

AlphaTauri’s Yuki Tsunoda and Alpine’s Esteban Ocon both picked up damage in the unseen incident, but have returned to the pits and are being repaired under the red flags.

The remaining drivers have lined up at the end of the pitlane ready for the restart, with Red Bull’s Max Verstappen in the lead after storming past pole-sitter Carlos Sainz’s Ferrari at the initial start.

Following a crash at the start of the British Grand Prix, Zhou Guanyu is conscious and now at the circuit’s medical centre to undergo evaluation. #BritishGP

This article will be updated.