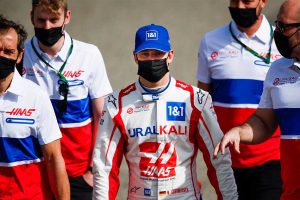 Mick Schumacher has picked 47 as his race number in Formula 1, with Sky Sports’ Martin Brundle calling it “ugly”.

The German took to the Bahrain International Circuit on Friday in the new Haas 2021 challenger, the VF-21, after joining the team in December 2020.

Fans of Formula 1 are always curious to see the numbers which drivers opt for, and there was some surprise and confusion when Mick chose 47.

And, during commentary on pre-season testing, Brundle said: “Mick Schumacher has had to take an ugly number. All of the best numbers are taken.”

He added: “It doesn’t feel like a Formula 1 number.”

But, it turns out, it was not Mick’s first choice.

He said in an interview with Sky Italy: “The number 47, I’ve been thinking about it. I wasn’t really sure what number I wanted. I wanted number 4, then I wanted number 7, but obviously they were taken.

“And then I was thinking, why not combine them? So at first I was like, okay, maybe 74, but then I was like maybe not, and then we kind of came up with 47, which is the same and has so many coincidences which were just too big to oversee.

“If you take all the birthdays of my family, that equals 47. If you think that 4 and 7 are both the numbers that I wanted, so it’s great to have them like this.

“Some fans actually said 4 and 7, as in ‘For Michael’, which is also very nice and great to have and great to be able to drive, and therefore we chose number 47.”

After 9⃣ years, the Schumacher name is back in F1! #F1 #F1Testing @HaasF1Team @SchumacherMick pic.twitter.com/0FLopbSuav

The connection with the number seven and Mick’s father Michael Schumacher is, of course, the number of Drivers’ Championships he won – a record which was equalled last year by Lewis Hamilton, and the Mercedes driver is in search of making himself the sole record holder in 2021.

Schumacher is part of the an all-new rookie line-up at Haas, alongside Nikita Mazepin, and they are sharing the responsibilities over the testing weekend, with Mick taking Friday AM, Saturday PM and Sunday AM.