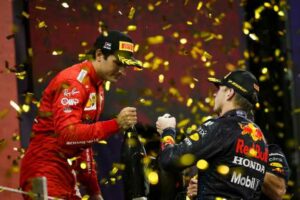 Given that they started their Formula 1 careers together, Max Verstappen’s title triumph has inspired Carlos Sainz.

The Dutchman became a World Champion for the first time at the Abu Dhabi Grand Prix, passing Lewis Hamilton on the final lap of the race to secure his first title.

He became the second driver to come through the Red Bull ranks and triumph after Sebastian Vettel and shared the podium with the man that he started his journey with, Sainz.

The two joined the grid together in 2015, being team-mates at Toro Rosso for just over a year, and the Ferrari man says the Dutchman’s success is something he looks up to.

“I think whoever came [out] on top was going to deserve it,” the Spaniard said to Sky F1 after the finale race.

“I think they are two great drivers at the peak of their careers, putting together a great show, congratulations to both, especially to Max after that mega win.

“Happy for him because we shared our first year together in Toro Rosso, and obviously him now winning the World Championship is also a good thing for me and I look up to it.”

Left the smoothest operation of all for last 😅 https://t.co/nrPq3a3SRI

It had been a fairly uneventful final race of the season for Sainz with him running comfortably as the best of the rest behind the top three for the vast majority of it.

That all changed in the closing stages when Sergio Perez retired, bumping him up to P3, but a Safety Car eradicated the lead that he had held over the rest of the midfield.

The 27-year-old kept his cool to secure the sixth podium of his career and felt it was the perfect end to what has been a “mighty” first season in red for him.

“After everything that unravelled in that race with that late Safety Car, we were in the right place at the right time with good pace,” he said.

“A podium to end a mighty season, first season for me at Ferrari, P5 in the championship, I think I took it all today [Sunday] and definitely enjoyed it.”

The result saw him leapfrog team-mate Charles Leclerc and Lando Norris in the standings and finish inside the top five for the first time since joining the F1 grid in 2015.

He also became the first man to outscore Leclerc in the same machinery since the Monegasque became an F1 driver himself.