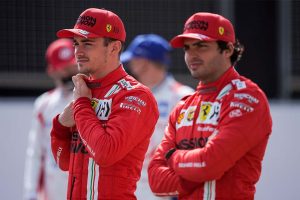 Charles Leclerc has the initial advantage over his new team-mate at Ferrari, but Carlos Sainz will start to beat him as the season goes on.

That is the opinion of the Scuderia’s test driver, Marc Gene.

Leclerc’s advantage comes from having been with the team in Formula 1 for the past two years, whereas Spaniard Sainz is heading into his inaugural year with the Italian outfit after joining from McLaren.

The adjustment to a new team is always likely to take time, and given the reduced three-day pre-season testing in Bahrain, it may be an even harder task than usual for Sainz.

Therefore Gene believes the season will start with Leclerc out in front, but as the year progresses, he expects to see the Monegasque driver have a fight on his hands.

As quoted by SoyMotor, Gene said: “Leclerc starts as favourite because he knows the team much better.

“I can guarantee you that there is no number one and number two because it doesn’t make any sense. We know internally and Carlos also knows that Leclerc has an advantage from the start.

“From here on, I am very sure that Carlos will be ahead of Leclerc on some occasions this year. I expect this more from the second half of the season.”

It will be an interesting battle between the two drivers in 2021, given they both beat their respective team-mates last year, with Leclerc getting the better of Sebastian Vettel, and Sainz outscoring Lando Norris.

It wasn’t just his performance on track which attracted the Ferrari bosses to poach Sainz, but his all round attitude, and listening in on his radio communications also helped make the decision.

Ultimately, Mattia Binotto is the man tasked with the end decision, but Gene also had a part to play.

He added: “I was a little involved in this decision because part of my job is also to work with the drivers and a detailed study was made not only of the previous year. In my case, for example, I made an analysis from his first races in Formula 1. He has been racing a lot. He has more than 100.

“You make some statistics, but Mattia Binotto is the one who really decides, but you make a history of a driver and then you are also very interested in knowing what he is like as a person, his personality, his attitude. One of Carlos’ great virtues is his maturity, his mental strength and that he is a calm driver even in extreme situations.”