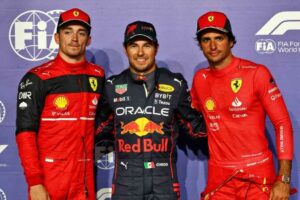 Charles Leclerc felt Sergio Perez had taken “some risks” that had enabled him to snatch his maiden F1 pole position at the Saudi Arabian Grand Prix.

In the final couple of minutes of qualifying at the Jeddah Corniche Circuit, three drivers all had a grip on pole position – and neither was Max Verstappen or Lewis Hamilton.

The first was Ferrari’s Carlos Sainz, who then had it snatched away from him by his team-mate Leclerc – winner of last week’s season-opener in Bahrain.

But just when it looked as though Leclerc would continue his perfect start to the campaign, along came Perez to pop himself into P1 on the grid for the first time in this series at the 215th attempt – the longest wait for pole any driver has experienced.

Arghh, so close ! But what a lap from Checo, fully deserves the pole today.
Very happy to see Mick getting out of the car after this big crash.
Race is tomorrow and I’ll give it all. pic.twitter.com/IFdM5oSeWq

“Checo surprised me because I believe he took some risks that in the end paid off.

“I went more safely – in the first two sectors I took enough risks and so I said ‘okay, let’s complete this lap which is good.

“Instead, we missed the pole by two hundredths, so we can never leave any stone unturned.

“But tomorrow there is the race and I hope I can bring home a good result.”

Both Leclerc and Sainz reported their cars had strangely performed better on used rubber than fresh tyres.

“The weird thing this weekend is we find ourselves better with used tyres than with new tyres,” said the 24-year-old from Monaco. “So we lacked the feeling with the new tyres to do the next step.

“I believe the tyre degradation [in the race] will be fundamental. There is more of it than expected. But I think we have clear ideas on how to manage the tyres, as we did in Bahrain.

“So we have to focus on ourselves. The first two corners will be important, without unnecessary risks, but if we can gain a position it would be better.”

Sainz, expanding on the tyre anomaly, added: “I don’t understand why I can’t make the new tyres work. All the fast laps I did today, I did them on used tyres. I find myself way better with used tyres than with new tyres.

“Something weird, which does not happen on any other track.

“I’m happy I was there fighting for the pole, but on the other side not that happy because I’d like to be on pole.

“In free practice I was trying something with the car – suspensions, set-up – to see if I could find a better feeling. In qualifying I put everything together, so I think I made some progress.

“The best way to prove that is to see how I will be tomorrow in the race, if I’ll be closer to the pace and if we can win.”