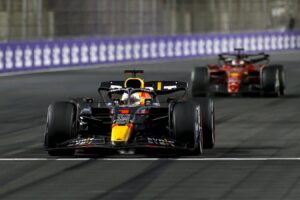 Charles Leclerc has said the “weaknesses” in his Ferrari were visible when he diced for the lead with Max Verstappen in Jeddah.

The two duelled for victory towards the end of an absorbing race, with Verstappen eventually using the advantage of DRS to pass the Monegasque driver.

Leclerc stayed within DRS range of the World Champion for the remaining laps but could not close in to try and overtake his rival, who then went on to win the Saudi Arabian Grand Prix.

Both drivers tried to ensure they had DRS for the start-finish straight, with the advantage gained after Turn 27 being such that the lead of the race hinged upon it.

Leclerc kept the lead for several laps as they duelled, but admitted Verstappen understood his “mind games” and eventually made the decisive move in the latter stages.

Has anyone ever seen #F1 drivers playing a game of chicken to see who goes first around a corner?

The Ferrari appeared to have the measure of the Red Bull for most of the race, but once Verstappen had managed to get within a second of Leclerc in front, that is where he thinks the F1-75’s shortcomings were highlighted.

“I think the point where we struggled most is whenever Max got the DRS basically because our weaknesses were just bigger, the straight-line speed difference was much bigger,” said Leclerc, quoted by GPFans.

“We were still quick in the corners but not enough to have that margin to cover. So from that moment onwards, it was a bit more difficult for us.”

Ferrari were quicker than Red Bull through the first sector in Jeddah all weekend and some drivers struggled to keep on top of their tyre temperatures through the sweeping corners in that part of the track.

Leclerc said that had not been an issue for Ferrari and felt he could maintain the gap to Verstappen when it came to grip levels, but their straight-line speed disadvantage was a problem for him.

“For the tyre management, I don’t think we did anything wrong there,” he said. “I don’t think it is the reason why we lost a win.

“They were consistent, but the first run was a bit more difficult. I think we did a great job by managing those mediums because it wasn’t easy following Checo [Perez].

“But towards the end, we actually had quite a good pace on those mediums. Then on the hard, it felt nice whenever I had a little bit of margin – I felt like I could keep the gap to Max.”