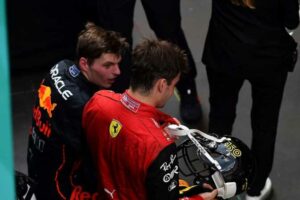 Charles Leclerc says he “quite likes” the position of being the hunted in the Championship while Max Verstappen is enjoying having the pace to chase him down.

For the second race in a row the Red Bull driver pulled back points in the title race, shaving Leclerc’s lead from 27 points to 19.

Verstappen brought in a perfect score at the Miami Grand Prix as he took the race win and the fastest lap point while Leclerc had to settle for second place.

Although he started on pole position, the Ferrari driver lost the lead on lap 19 and just didn’t have the pace on the day needed to fight back.

It meant that while Leclerc continues to lead the Drivers’ standings, as he has done all season, what was once a 34-point margin has almost been slashed in half.

“I think we have been in only one position since the beginning of the season, which means we are hunted for now,” said the Monégasque driver.

“I quite like this position to be honest, because it means that you are doing something right. But it is also true that it’s two races that the gap is slowly closing down.

“But yeah, I don’t I don’t really mind to be honest whichever position I am in.

“I just want to be the most competitive out there, and at the moment, it seems that Red Bull has the upper hand in the in the races.”

Red Bull have had the better pace in the last two race weekends, Verstappen dominating the Emilia Romagna Grand Prix weekend as he led home a Red Bull 1-2.

But while the Milton Keynes team wasn’t able to get both cars on the podium in Miami, at least in Verstappen’s hands the RB18 is “quick”.

And that, he says, makes all the difference in how one feels whether they are being hunted or are the hunter as he is today.

“I like the position I’m in at the moment, knowing that the car is quick,” Verstappen said.

“And for example, end of last year, of course, I was the one who was being hunted. And that was actually not a great position because I knew that we didn’t have the pace anymore.

“I knew it was going to be very tricky to the end. So yeah, just depends a bit of how competitive you are as well.”