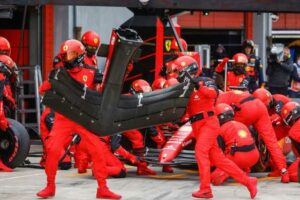 Crashing into the barriers at Imola while chasing down second place, Charles Leclerc says right up until that lap he was okay settling for third.

And then his “mindset changed”.

Leclerc was on course for a podium at the Emilia Romagna Grand Prix, the championship leader running behind the faster Red Bulls at the first of Ferrari’s two home races.

It looked a done deal, the Monégasque set to lose points to Max Verstappen but only seven which meant he would leave Italy with his lead in the championship fight still more than 30 points.

And then he got greedy.

Leclerc admits his mindset “changed” that lap, the one that saw him push too hard and be too aggressive over the kerbs at the Variante Alta chicane.

Pitched into a spin, he went nose first into the barrier.

Explaining his crash to ESPN, he said: “I think on that particular lap I saw an opportunity.

“Throughout the race I had been very honest with myself and I thought Red Bull was too quick for us. Third place was the place we deserved through the weekend because we just weren’t as quick as Red Bull.

“But on that particular lap my mindset changed and I saw the opportunity to go for second, and I took more risk than I should have done instead of just taking the third place home.

“Again, looking back at it, it is always this balance that you need find as a driver and how much risk you are going to take and how much reward it is going to give you.

“Taking the second place that day was something that was not expected and it would have been great, but it didn’t happen and I lost a few points. It’s something I will continue to think about and maybe change the approach in those situations.”

The 24-year-old, who up until this season had only won two grands prix, has doubled his overall tally to four this season and holds a 27-point lead in the Drivers’ Championship race.

He said: “It feels really good, first of all, especially after the last few years that have been very difficult for the whole team.

“We have been struggling a lot with performance, and to be fighting for sixth, eighth and tenth place, even if you are doing the perfect job, it is difficult for a team like Ferrari and for myself, so to be back at the top feels amazing.

“Whether it feels any different to what I experienced before getting to Formula One, not really. Of course you have a bit more pressure and expectations, but that doesn’t change much for me. The approach is the same as I had back in the past.”